Installing Steam Workshop Mods and Maps to your Unturned Server

Subscribe to the workshop content you want to use on your server from the Steam client, and let it download to your PC. We recommend you have a text document on hand open such as Notepad++, if you plan on using the automatic download method. You will use the program to help you record and transfer the Steam Workshop ID numbers for each mod you want to install to your server. Write them down as you subscribe to them in Steam. You can see their ID numbers on each workshop addons URL link. 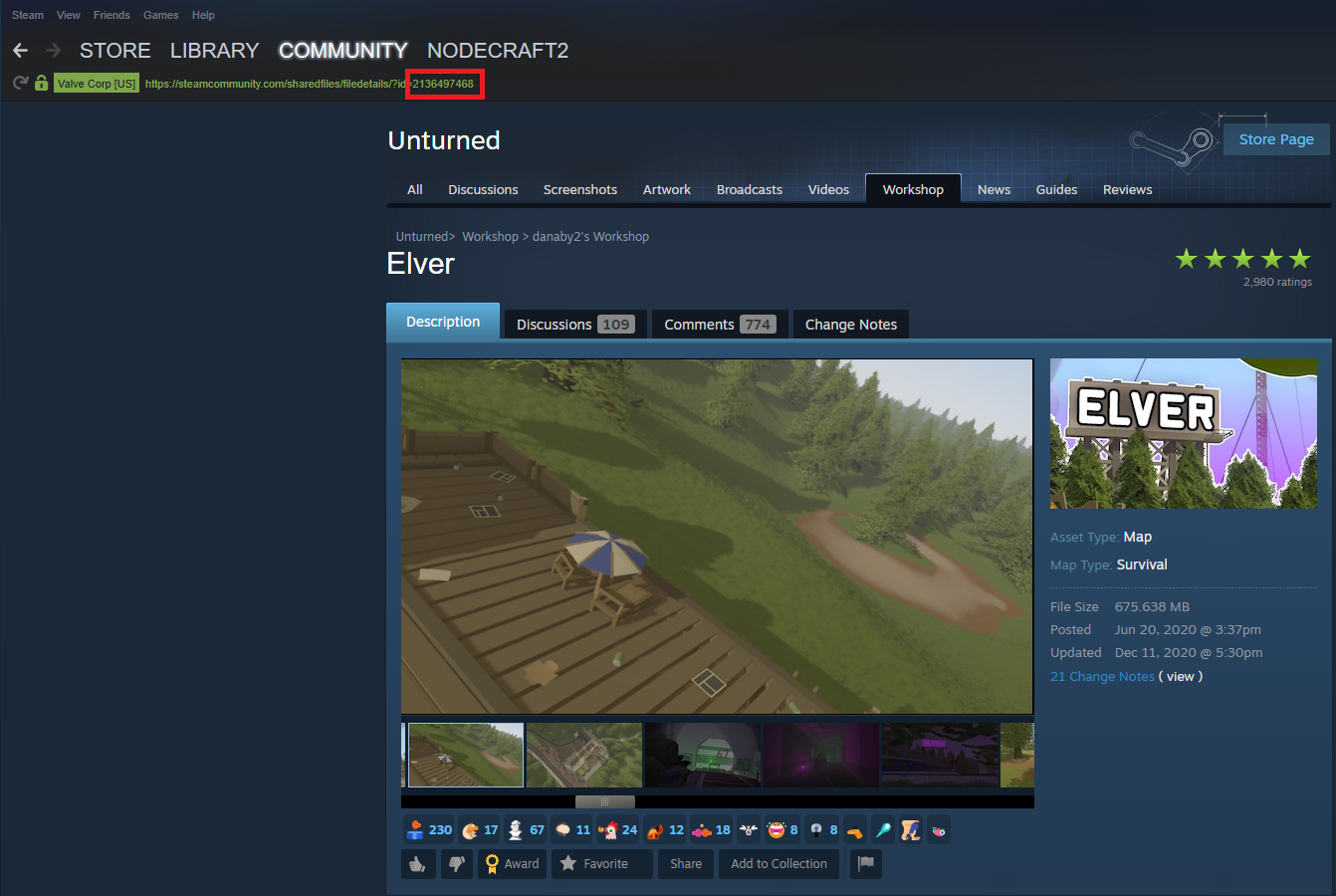 You can also pull up a list of all the mods you've subscribed to if you enter the Steam Workshop, and click "Browse", then "Subscribed Items". This list won't show the Steam Workshop ID number however, you will need to click on each one to bring you to their pages to find their ID numbers like in the example above. 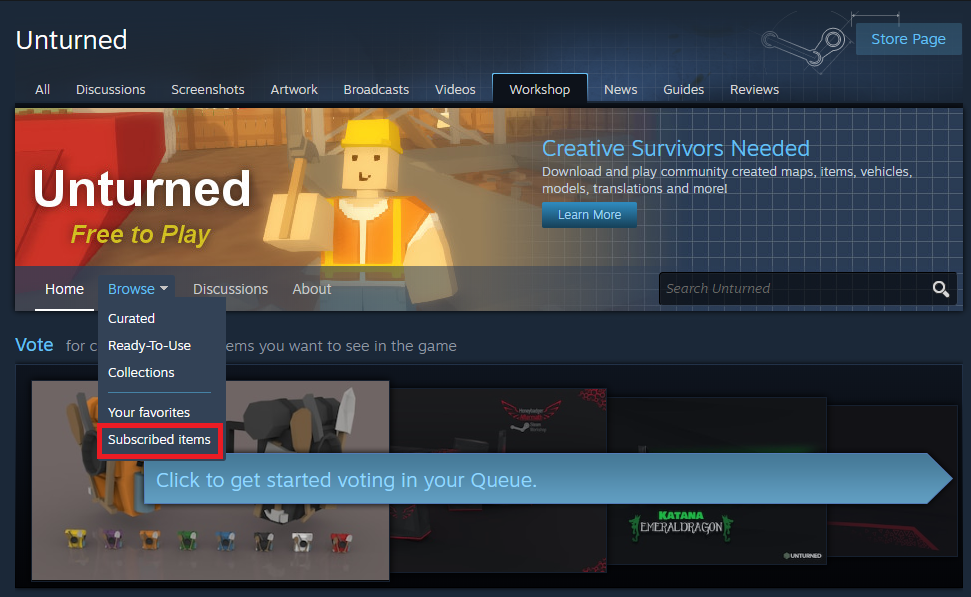 In order to use the automatic workshop ID download method, you must navigate to the unturned folder, which is inside the server folder in the main directory of the File Manager on the left hand side of your NodePanel. If you don't see an unturned folder there, it means you have not started the server as least once yet. The game will create a series of folders and files when it starts up. Once the server has started up, stop it, and when you look in the servers folder, you should see a newly created unturned folder.

Inside the unturned folder will be a file called WorkshopDownloadConfig.json. Select the file and then click on the "Edit" button. 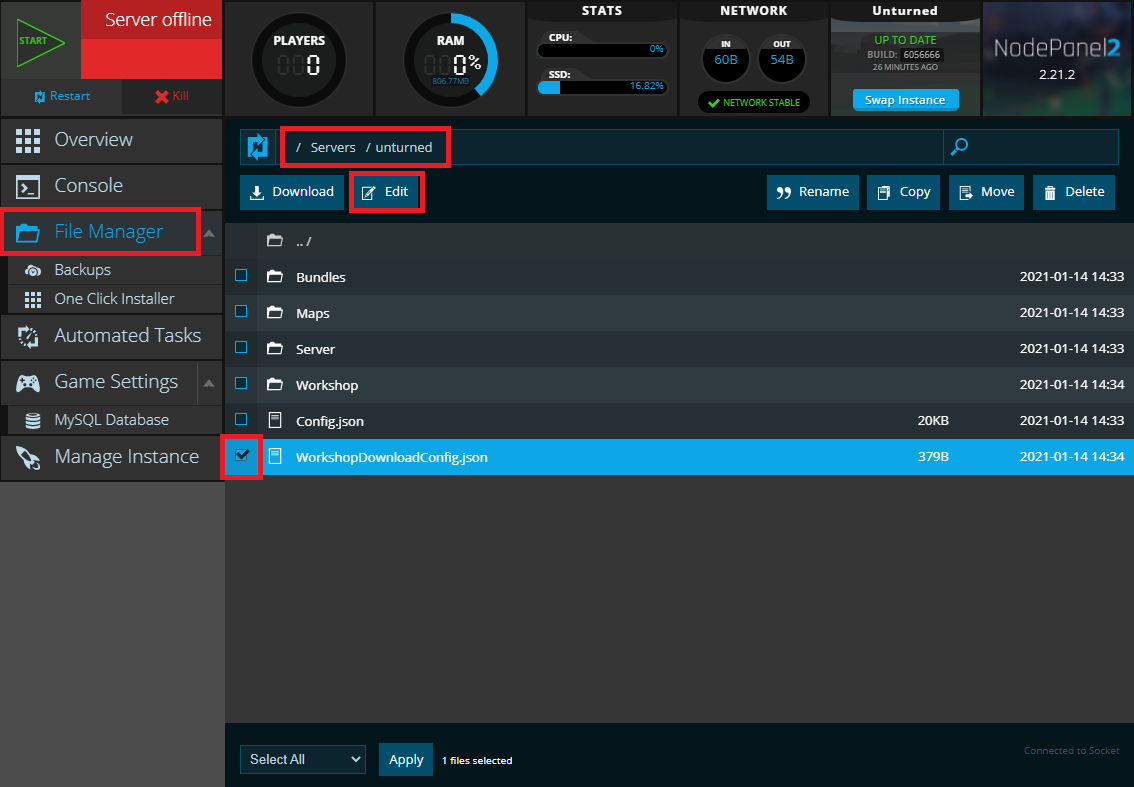 If this is the first time opening this file, you will see something like the screenshot below.

The line you need to edit is the first one, File_IDs. You will be placing all of the Workshop ID numbers you've recorded in your text document (Notepadd++) and entering them in between those 2 brackets.

Press Enter on your keyboard a couple times to give yourself some space to add in the ID numbers like so:

In between the white brackets, put each ID number on it's own line. Add a comma after each ID number, except for the last ID number which needs no comma at the end. Remove any blank lines from the config file, until it looks something like the screenshot below.

When you're finished making edits, click the blue "Save" button in the upper right corner. You're all set to start your server up, and it will begin the process of downloading the workshop content.

You will see in the Console section of the control panel that the Steam Workshop mods are being downloaded, and installed automatically. Using this method, the game automatically sorts the mods into the correct folders (maps into "Maps", other items into "Content" in the /server/unturned" directory). 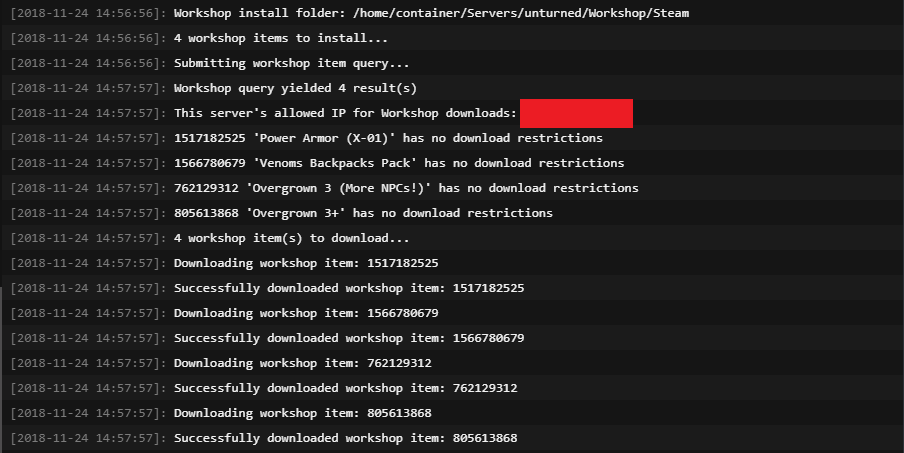 (the red block is the server IP, which we covered up for this picture)

A Note about Workshop Downloads for Unturned

After the developer of Unturned switched the core graphics engine used by the game some time ago (Version 3.28), much of the content on the Steam Workshop became outdated and unusable in the game. The developers of the mods and maps had to update their creations to make them work with the major changes that were introduced in that version. Many mods and maps had been abandoned by their authors, and were never updated.

This became a huge issue, as people found and tried to use this outdated content on their servers, which usually resulted in the server instantly crashing.

Because of this, the developer had to add a feature to the automatic downloader that looks to see if the mod or map has been updated to run on the new Unity 2017 version of the game. If it has NOT been updated, the game will not download it. The game will skip that workshop ID and continue trying to download others on the list. If the entire list of Workshop ID numbers you have added to the file are outdated, it will skip them all. If the automatic downloader will not download it, we highly recommend that you do not try installing it manually. As mentioned above, this usually caused servers to crash instantly on startup.

Also, as part of that same doublechecking process, the game can now detect that a mod you have added to the list requires another base mod to work correctly, and it will automatically download that other mod too. Because of this feature, you may see messages in the console that it had downloaded less or more mods then you entered.

Given how easy the automatic method is for installing mods, we're only including this method in case you are using mods that are not carried in the Steam workshop for Unturned.

If the non-Steam Workshop mods will not load, contact the author of the mods for more assistance with how to properly load them.

Create a Unturned Server today! Save & Swap to any other game, for no additional cost.
Start Free Trial