How to Spawn Dinos on Your ARK: Survival Evolved Server

We have a guide on both these subjects located here: How to Use the Admin Console on your ARK: Survival Evolved Server

The game has two basic commands for spawning in creatures. The two main commands are Summon and SpawnDino.

There are other summoning commands as well. Some of which are very similar (they work almost exactly the same), while some have some weird twists. These commands include: SDF, SpawnActor, SummonActorSpread, GMSummon. The ARK: Survival Evolved Wiki has more information on these other specialized spawn commands.

There are other admin commands that will might be super useful to avoid being eaten by what you just spawned! They're listed in a separate section at the end of this guide.

How to Find Dinos IDs for Spawning

This usually has the most up to date information on the creatures, and it also has a ton of other useful information about the game. It's really worth checking out in general!

There are two major columns the table, for "Entity ID", and "Blueprint Path". Some spawn commands use one or the other. 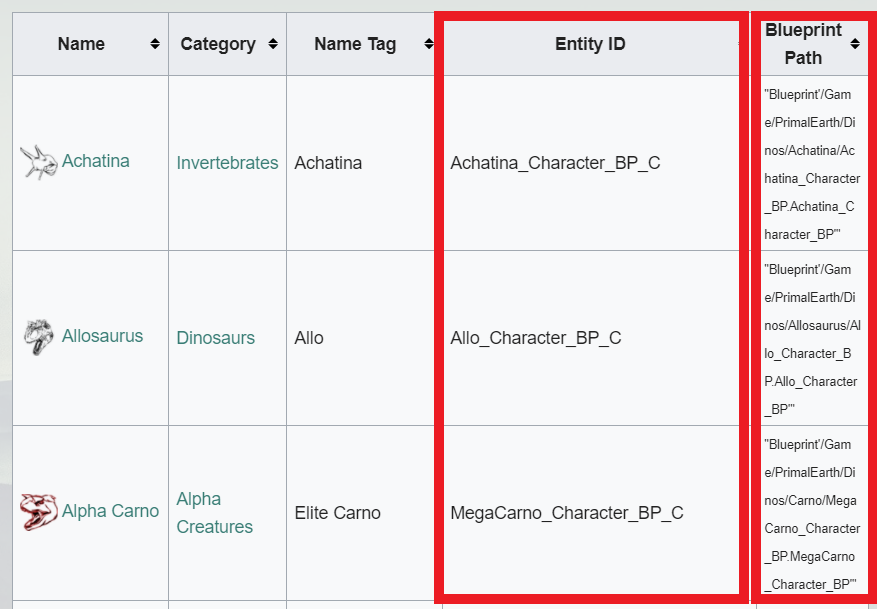 When using either one, the uppercase letters matter, and they should be copied exactly as is.

This works exactly like the "Summon" command above, but the dino will be automatically tamed when it appears! Woot!

This command is a little more complicated then the Summon command, and has five different arguments:

They should be separated by spaces. If you don't want to set any of the last 4 arguments, just replace them with zeroes.

These arguments are explained below.

The dodo in the screenshot below was spawned with a spawn distance of "2000" as an example (the player is floating in midair with the "Fly" command). 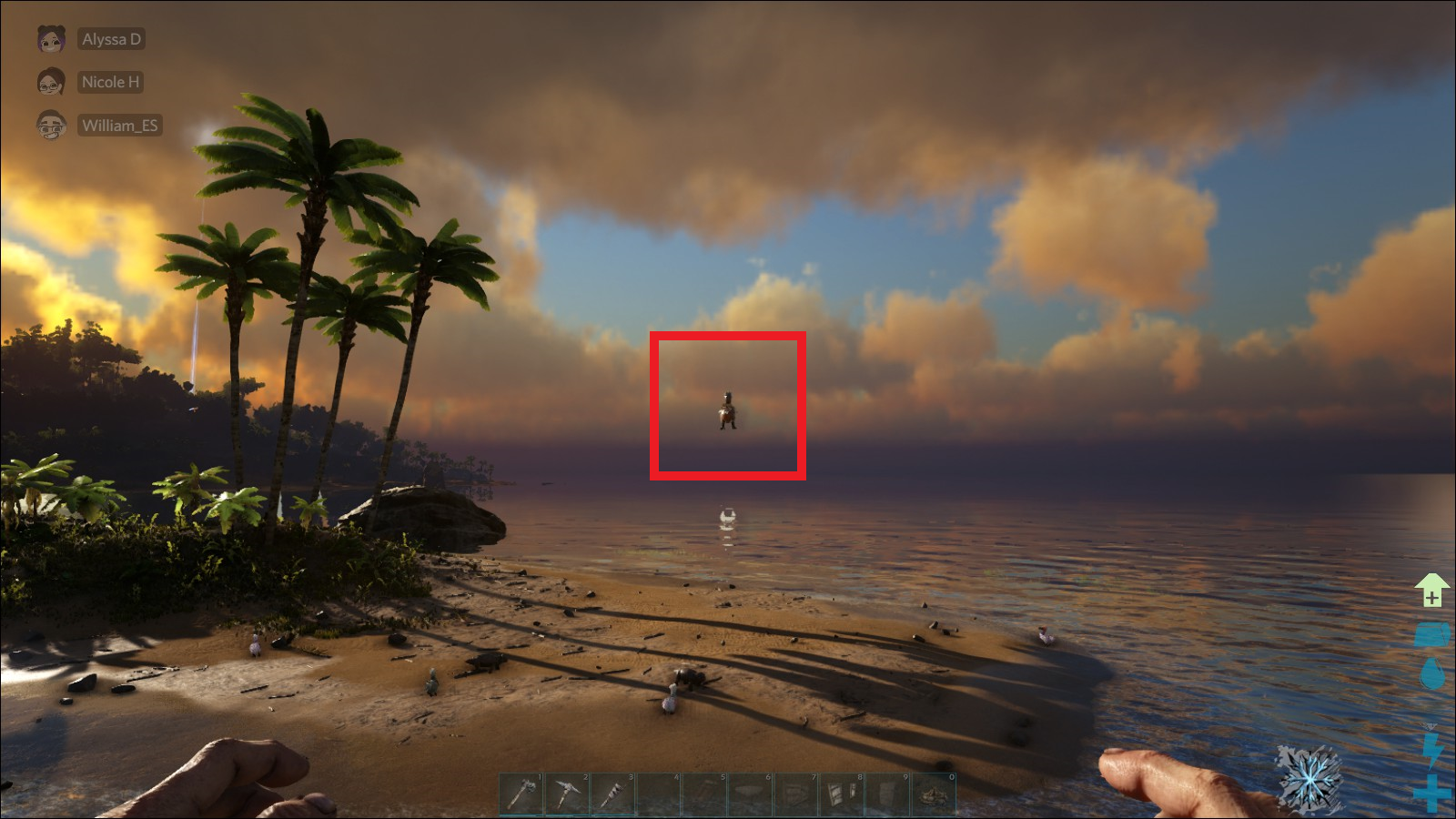 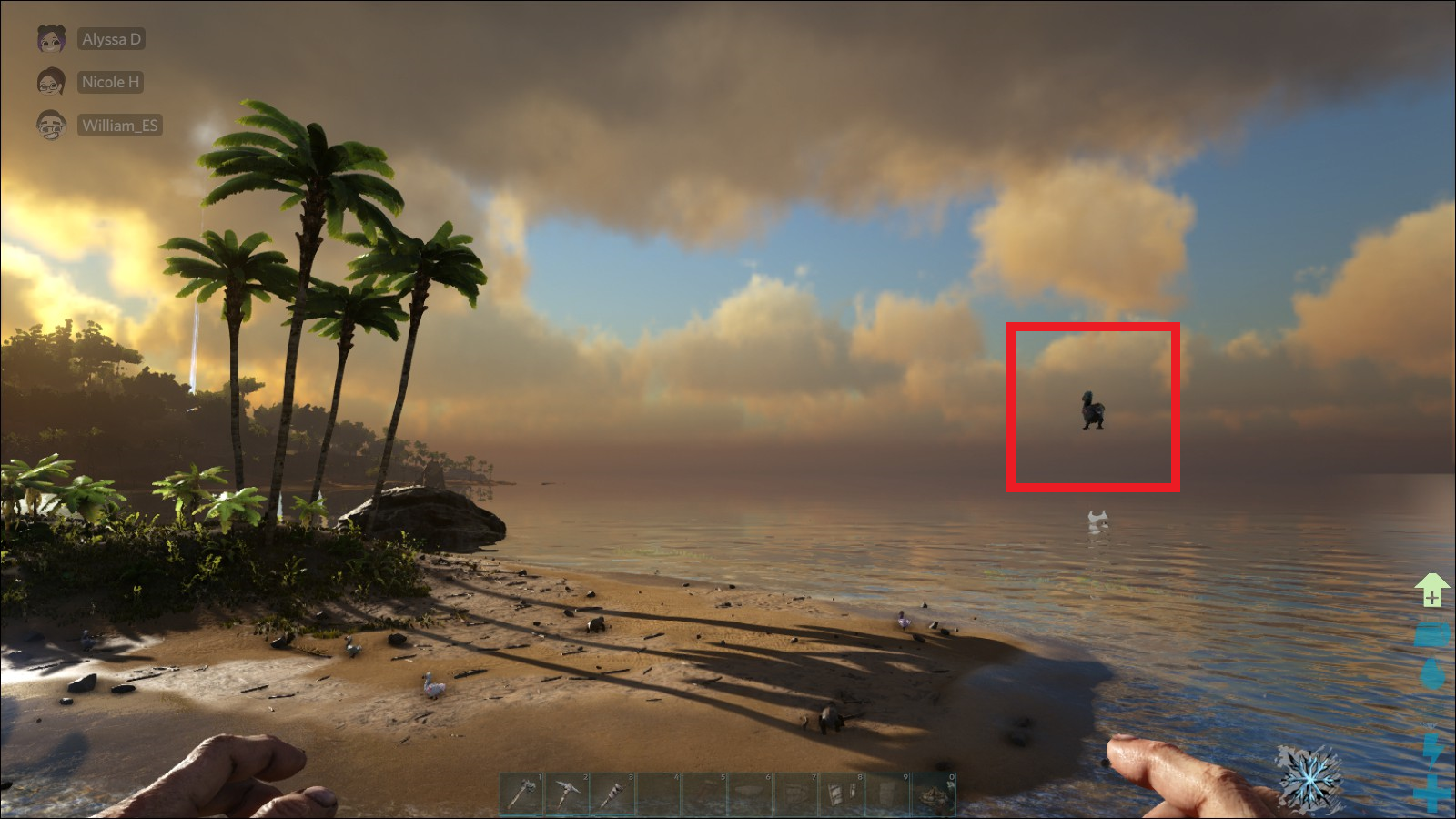 An example of this put together:

This example would spawn in a level 120 Gigantopithecus (Bigfoot)

If a dino is normally hostile, it will be spawned in hostile and will attack! So, some of the following other admin commands might be useful to prevent getting eaten by the things you spawned!

Like most admin commands, you need to precede these with "Admincheat". It can also be shortened to "Cheat". The upper case letters aren't required either, so all lowercase works fine too.

Setting this to "True" make you invisible to all dinos. They will completely ignore you, even if you attack them. They will move around normally, and might attack other dinos (meaning they can wander away). Use Admincheat EnemyInvisible false to turn it off.

Dinos can't damage you. They will still try to attack you though, which can be sometimes be pretty annoying (blocks your vision, camera shake, etc). While they're busy attacking you, it does keep them from wandering off though! It also makes aiming some of the other admin commands very easy since the hostile dino will be right in your face trying to eat you. Type Admintcheat God again to turn it off.

Turns off the AI for dinos. They will still have idle animations, but they won't move or attack. Players are unaffected by this command. Useful for keeping dinos from wandering off. NOTE: When the AI for the dinos is disabled, it may prevent some admin commands from working correctly (like "DoTame" and "ForceTame"). ALSO: When you turn off the creature AI, you may see some strange glitches like fish and sea creatures floating in the air. It's just one of those wacky bugs. These glitches end when you turn the AI back on. Repeat Admincheat PlayersOnly again to turn the effect off.

This command automatically tames whatever creature your viewpoint crosshairs are targeted on. According to the Wiki, If you use this command while mounted on another dino, it may crash the game/server. This command can be extremely hard to target dinos with if you have aiming crosshairs disabled (as is on most servers). Using the God admin command and letting a hostile dino attack you is one easy way to get around this (it will literally be in your face trying to eat you, making targeting very very easy).

This command also automatically tames whatever creature is under your veiwpoint crosshairs. Dinos tamed this way can be ridden even without a saddle. If you cryopod the dino, and then deploy the cryopod, it will lose that saddle effect. This command may also crash game/server if it's used while you're mounted on another dino. Same targeting issues apply to this command as well (see "DoTame" above)

This automatically tames dinos within a certain radius. It doesn't have any of the finicky targeting issues as the regular "ForceTame" command. See the screenshots above in the "SpawnDino" command for an idea of how far the radius will be.