Creating a Mapcycle for Your Insurgency: Sandstorm Server

The MapCycle file must be placed in the folder: /Insurgency/Config/Server/, in the main directory of the server. The folder /Insurgency will exist already when the game is installed, but you will have to manually create the other two folders: Config and then the folder Server inside of it. The file should be a standard .txt format.

You can create the text file on your own computer, and upload it to the server, or use the "create file" button in the file manager view of the control panel, which opens a text editor. If you create the file in the Nodecraft control panel, make sure to include the extender .txt at the end of the file name when you are creating the file.

The MapCycle files does not need to be named "MapCycle". The actual file name can be whatever you want it to be, and you can have multiple files for different setups. One for training, one for competitive matches, etc.

You can change which file is actually loaded by the game by using the command line -MapCycle parameter (explained below).

Add individual scenario names from the "Scenario List" section at the end of this article, to the file. Ensure you add one scenario per line, with a blank line in-between each one.

To tell the server which MapCycle file to actually load on startup, you need to set that in the "startup arguments" on the game settings tab of the control panel.

Click on game settings, then the advanced settings tab across the top, and then scroll down the bottom of the page, until you see the "startup arguments" box as shown below. 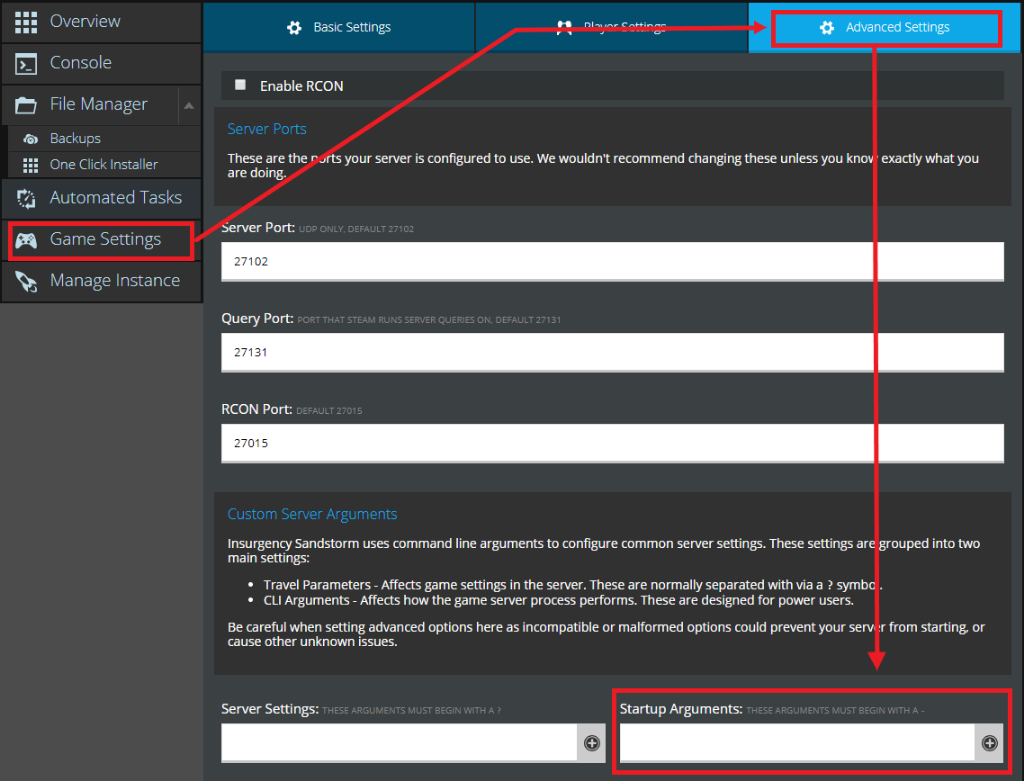 In the startup arguments box, add the following setting:

All startup arguments require the - at the beginning. If the MapCycle file is named "MapCycle.txt" you would load it with:

Note: You do NOT need to include the extender part of the file name such as the .txt.

For Checkpoint scenarios “Insurgents” and “Security”, refer to the faction you play as. For Push, the faction names represent the team you attack as. Firefight for most maps will contain a West and an East layout.

At the heading of each scenario section, if you see a word in parenthesis after the scenario name, that is the actual name of the map it's played on. For example with "Crossing (canyon)", the name of the map that all "crossing" scenarios are played on is actually called "canyon" internally inside the game. If there is no second word in parenthesis, then the map is the same name as the scenario. This is actually not needed for setting the mapcycle file, but it might come in handy when doing other things with your server.