This guide will show you how to install and use custom maps from the Steam workshop on your ARK: Survival Evolved server. This is only required for player created maps which have been posted to the Steam Workshop and which are not an official part of ARK.

The maps from the downloadable content (DLC) such as Aberration, Scorched Earth, and Extinction are already included in the core server files. Other official maps such as Valguero are included in the server files too, and can be added to your client by opting into the free DLC on your Steam Client, and they are automatically installed on the client.

Find the Map you want to Subscribe to on the Steam Workshop:

As an example for this article, we will use a custom map available on the Steam workshop called "Catania". Once you have located the mods page on the workshop, you can subscribe to it on Steam.

The workshop ID number for the map mod will be shown in the URLbar on Steam, if you have that enabled. 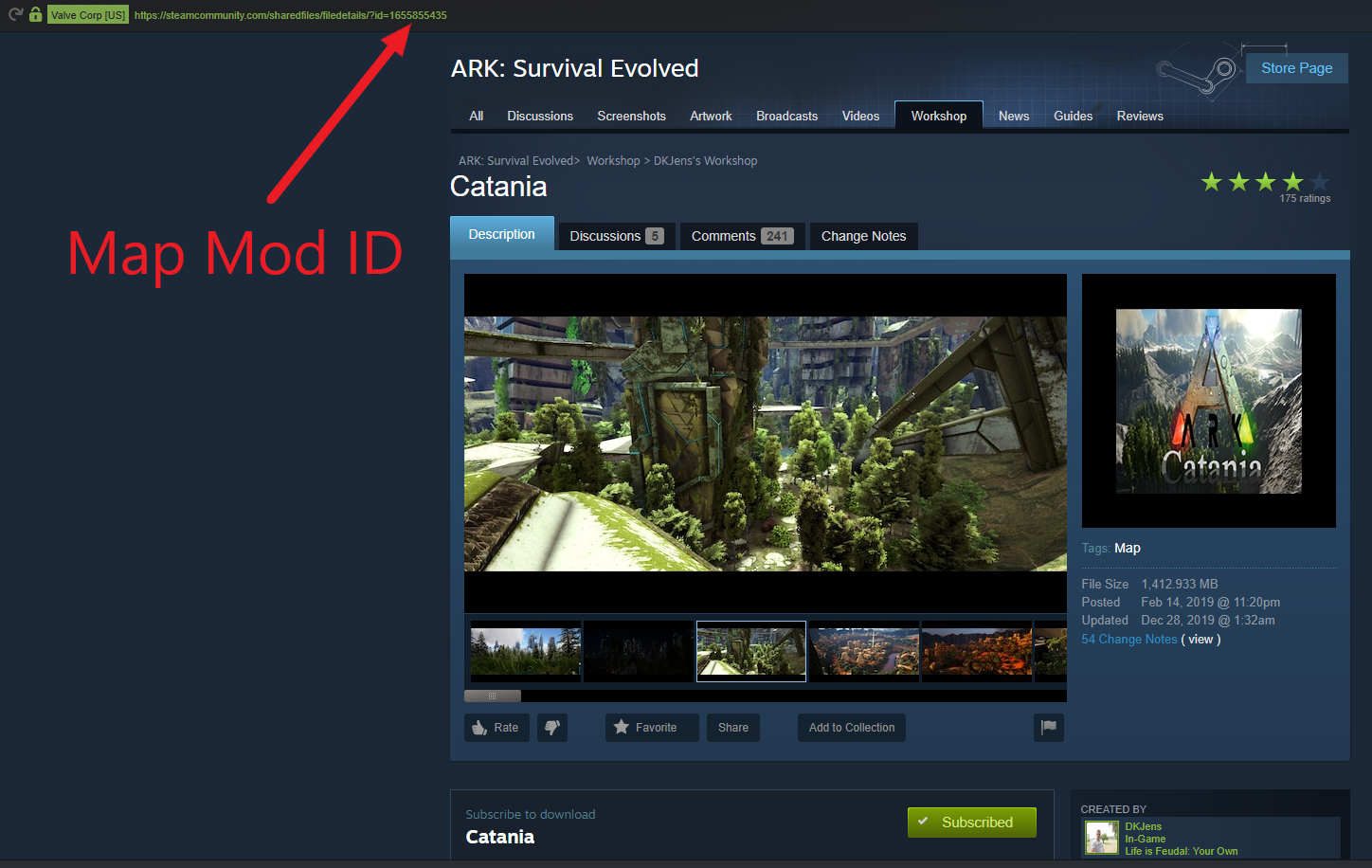 While you are on the Steam Workshop page for the map mod, make a note of the map name that you will need to set later on in the game settings.

For the Catania map, this is "Catania_P" as shown on the workshop page.

Get the Map Mod from your Local Client

Once you've subscribed to the mod on your client, the process of moving the files onto your server is the same process as used for any regular mods. We have a separate article that describes how to do that in our knowledgebase titled "Adding Mods to your ARK: Survival Evolved Server".

Once you have the map mod moved to your server, it will be placed in the same folder as regular mods, which is shown in the guide above.

Setting "ActiveMapMods=" in your Config File

To enable a map mod on your ARK server, you need to add a special setting in the gameusersettings.ini file. This is similar to the ActiveMods= setting used to enabled mods.

In the "server settings" section of the config file, add the line ActiveMapMods=, which needs to be followed by the workshop ID number of the map mod. The setting is case sensitive, so the upper case letters are important. In the example of the Catanani map, this line would be:

Changing the Map in Game Settings

The last step is to set which map the server will actually load on the next startup. You do that in the Game Settings section of the Nodecraft control panel.

Go to the "Game Settings" tab of the Nodecraft control panel for your ARK: Survival Evolved server. On the "Basic Settings" tab, locate the "map" field. Click in that box, and manually enter the file name for the custom map.

The "Map" field does allow manual entry. The drop down menu button at the far right end is just a convenience which auto-fills common maps names (this prevents startups errors which can result from incorrect map names or typos).

Then click the "save" button at the bottom of the Game Settings page to save the map name (and other changes you made on that page).

If everything has been set correctly, when you restart the server, it should load your custom map!