Adding Mods to Your Eco Server

Mods for the game Eco are now hosted on the site Mod.io, which is a cross platform multi-game site for downloading and managing mod content.

Prior to this, mods were hosted in multiple locations such as the Eco forums, and then moved to an unofficial 3rd party site called "Eco-mods" (which can still be found HERE ). Mod.io is now the officially recommended source for mods.

To use all the features of Mod.io, you will need to use an existing login, or create a brand new account.

You can actually download the mod files required for installing mods on a server without having a Mod.io account. Features such as subscribing to a mod so it's automatically installed on your client will still require a Mod.io login, though.

If you have already have accounts on any of the following services, you can use your login information from these services to log into Mod.io (instead of making a new account):

If you don't already use one of these services, simply create a new account on Mod.io directly. The account can be made for free!

Browse for Mods on Mod.io

On the Mod.io site, you can select the game Eco, and see a listing of all the mods available.

Once you find an interesting mod, click on its thumbnail to visit its page. This mod shown below offers some alternative methods to reduce the production of toxic waste from the ore smelting process (called "tailings"), which can begin to pile up very quickly in game, and then poison the ground so nothing grows anymore. 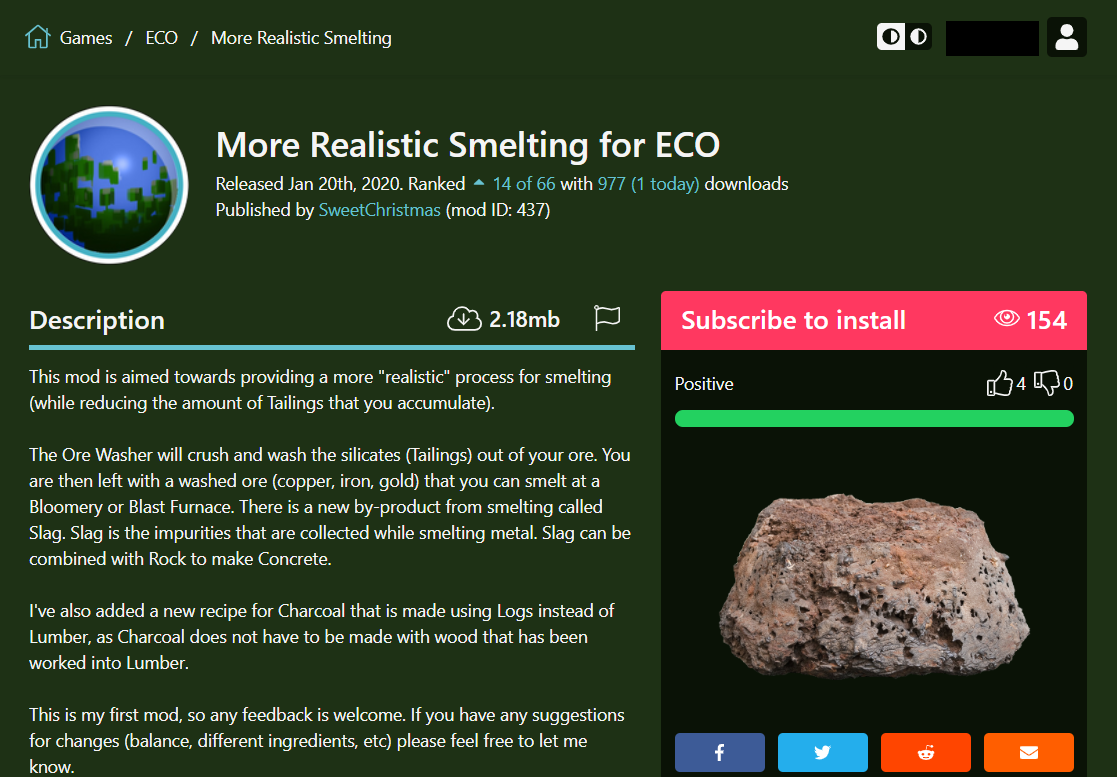 Installing Mods on Your Eco Server

When you find an interesting mod you want to install on your server, scroll down it's page until you see a section called "Releases". This section has the links for actually downloading the file required for the mod. Most mod files will be in .zip format.

If a mod has more then one release shown, one is usually marked with a "trophy" symbol (like the screen shot below) to show it's the most current one. You can also see the dates when they were added, to see double check which is newest.

Upload to the Server

Once you have the file downloaded to your computer, upload the mod file directly to the "Mods" folder on your Eco server.

The "Mods" folder will already have a wide variety of existing folders there. You don't need to put the .zip file into any of those folders inside "Mods" (the game will take care of that for you).

To finish the installation of the mod, you will need to unzip the file. You can unzip a .zip file in the Nodecraft file manager by:

Unzipping the file should create entirely new mod folders. Those folders shouldn't overwrite any of the existing folders that were already in the "Mods" folder. If a mod author had any special instructions on their mod page, follow those instructions as well.

Installing Mods on Your Game Client

You can install mods on your client in two different ways:

You should now have mods installed on your server, and on your client!

Create a ECO Server today! Save & Swap to any other game, for no additional cost.
Start Free Trial