Support / Minecraft Bedrock / How to Upload an Existing World to Your Minecraft: Bedrock Edition Server

How to Upload an Existing World to Your Minecraft: Bedrock Edition Server

This article will show you how to upload an existing world of Minecraft: Bedrock Edition to your Nodecraft server.

Find the "world" folder of your existing game

First thing you're going to want to do is find where your world files are kept on your computer. For Windows 10 and Windows Phones they are generally located at:

If you have more than one world created on your computer, the tricky part will be figuring out which one of these funny named folders is the correct one you want to upload. There's an easy way to tell, thankfully. Open one of these folders, and find the levelname.txt file, open it up in a file editing program (we like to use Notepad++), and it will match the name you've given the world while in singleplayer.

Use a Compression Utility to Zip the Entire World Folder

A zip utility is a program that will package all the files into one bundle, and then compress the files to make them smaller. This makes the process of uploading to the server a lot faster. It is often referred to as "zipping" the files. There are several programs that can do this, and many can be downloaded for free.

We highly recommend using 7zip, which is both free and very easy to use. You can get it here: https://www.7-zip.org/. Simply download the correct version for your operating system, and install and set it up. When you are ready, select the world folder and zip it.

NOTE: The Nodecraft control panel can support uploading entire folders without zipping them first, but there are still several advantages to zipping them up. The files are all bundled in one package, which can be moved around on the server easier, and the files will be smaller which means faster uploading. If you are having trouble with the zipping part of this process, you can skip it and upload just the whole folder.

If you haven't started the server at least once, it's generally a good idea to do so. Files and Folders are often not created until the first server start up. For example, the world folder we are going to need is only created after the server has been started.

This is what the Nodecraft File Manager looks like before the first startup, not a whole lot in there: 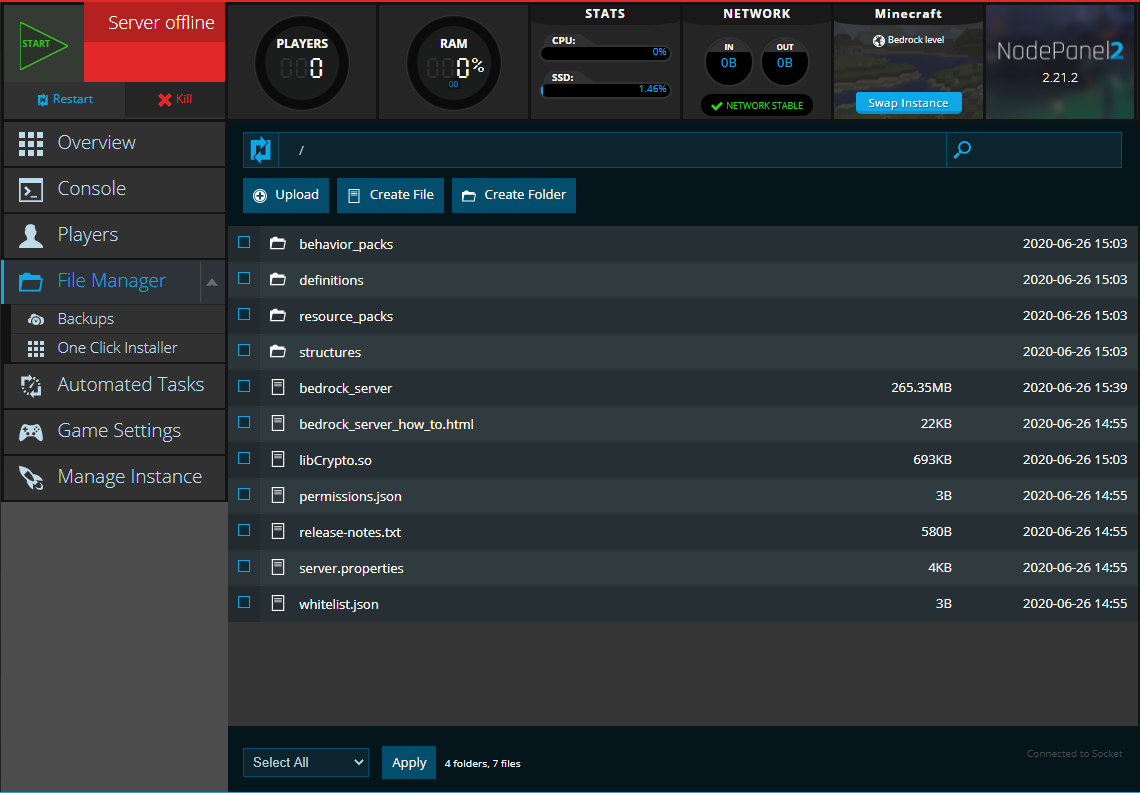 Here's what the File Manager looks like after it's been fully started up at least once. There is the world folder we need! 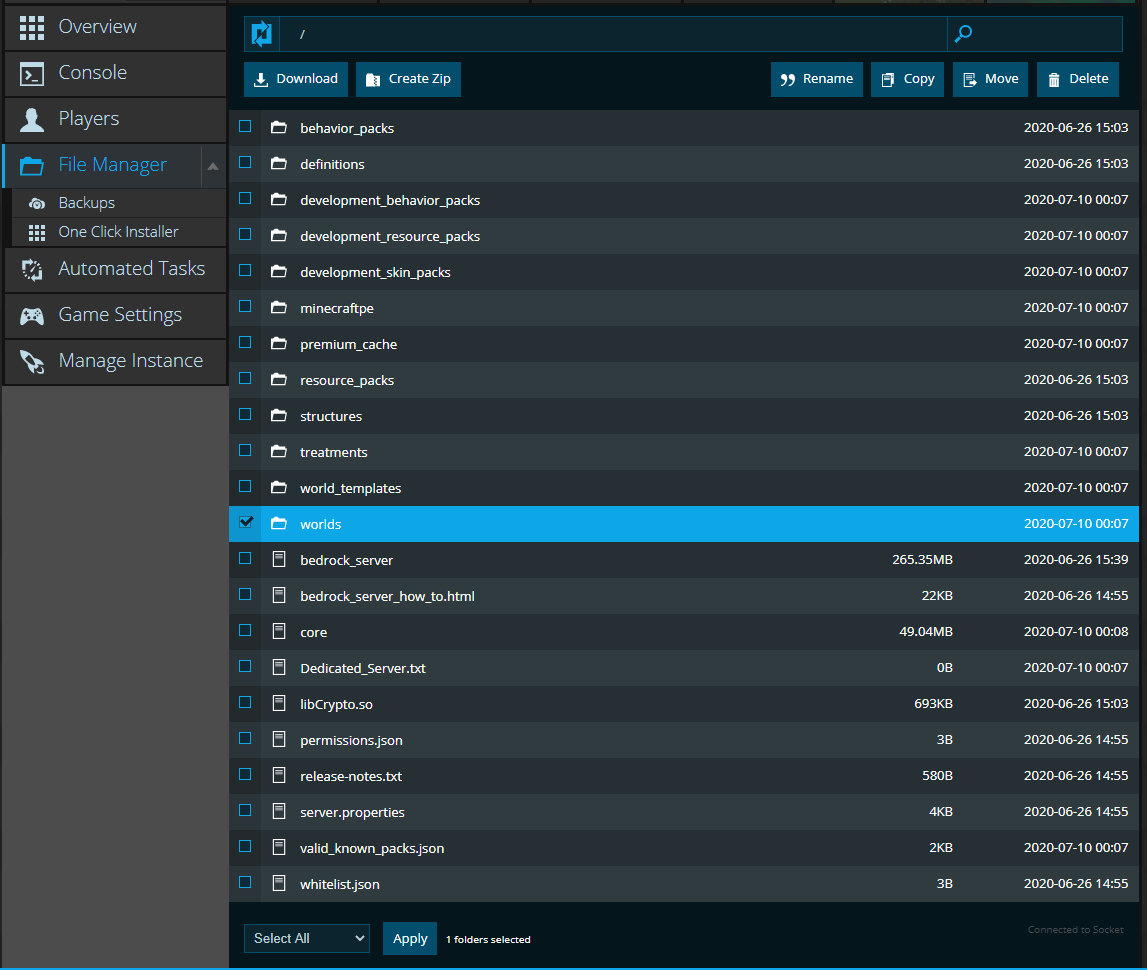 Go ahead and stop the server after the server is done starting up for the first time.

If you don't wish to keep the world that the server created, you can delete the "Bedrock Level" folder inside the /world folder in the File Manager.

You can keep it on there if you wish. Our Nodecraft Control Panel makes it really easy to have more than one world on the server that you can swap between if you want. This guide will explain that process later.

Upload the Zipped World File to Your Server

Use an FTP Program

If the zipped files are very large, we recommend using an FTP client to manage the file upload. FTP stands for "File Transfer Protocol". It's a standardized way to connect to a remote computer, and then manage the process of uploading large files. FTP programs break the file into smaller parts, send them one at a time, and keep track of which parts were received correctly at the other end. FTP can even resend bits that were lost or garbled at the other end. It also had the advantage of being much faster in most cases.

We have a basic guide for FTP use in our knowledgebase which you can find HERE. We highly recommend Filezilla for this, but the guide has links to many popular programs that can be used for FTP.

Drag and Drop in the File Manager

The drag and drop method can handle fairly large files (several hundred megabytes), but can be slower than using FTP. It also has no built in spot-checking, so if anything interrupts the process, it will error out, and you may have to start again.

After the zip file has been uploaded to the /world folder, you'll want to select the zip file, and press the "Unzip" button. 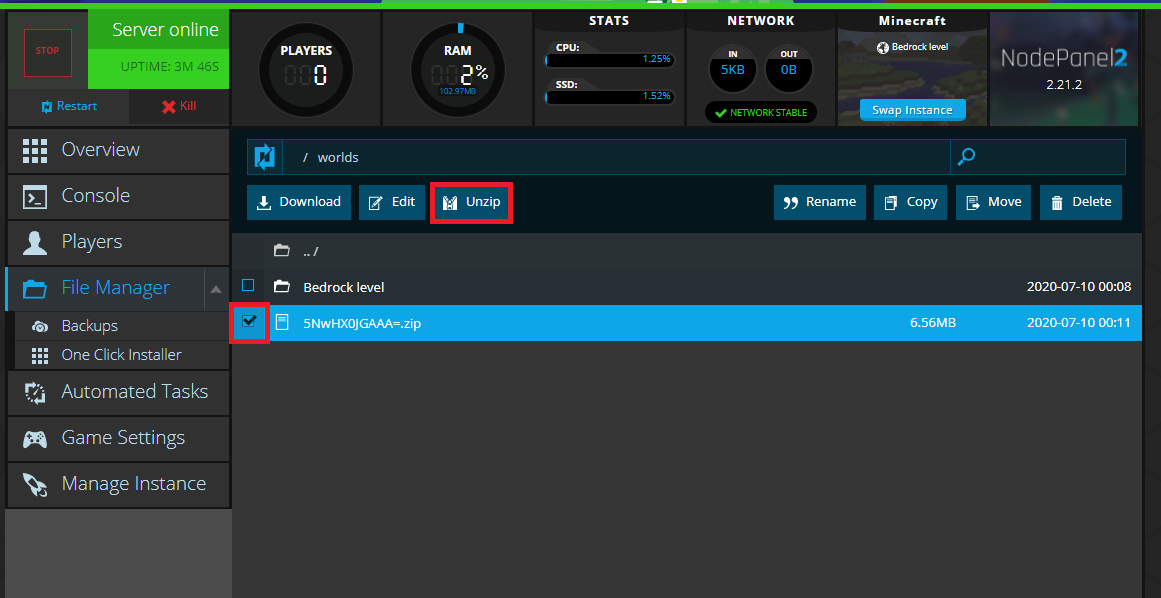 Next, rename the world folder to make it easier for you to find. Some server operating systems generally have trouble with special characters like the = at the end of the world name, so try to keep it to letters and numbers. 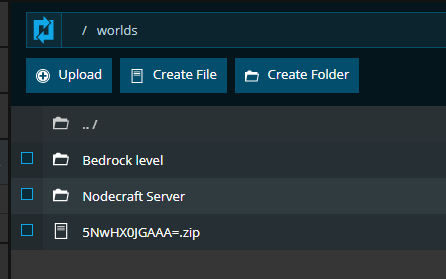 Change the Settings to Use the Correct World

Navigate to the "Game Settings" page in the left hand side of your Nodecraft Control Panel and then the "World" tab at the top. In the "World Name" text box, type in the exact name of the world folder you want to use. It needs to match the name you renamed your world folder to exactly, which means it is case sensitive. In this example, ours was called Nodecraft Server. Don't forget to hit the Save button in the lower right of the Panel. 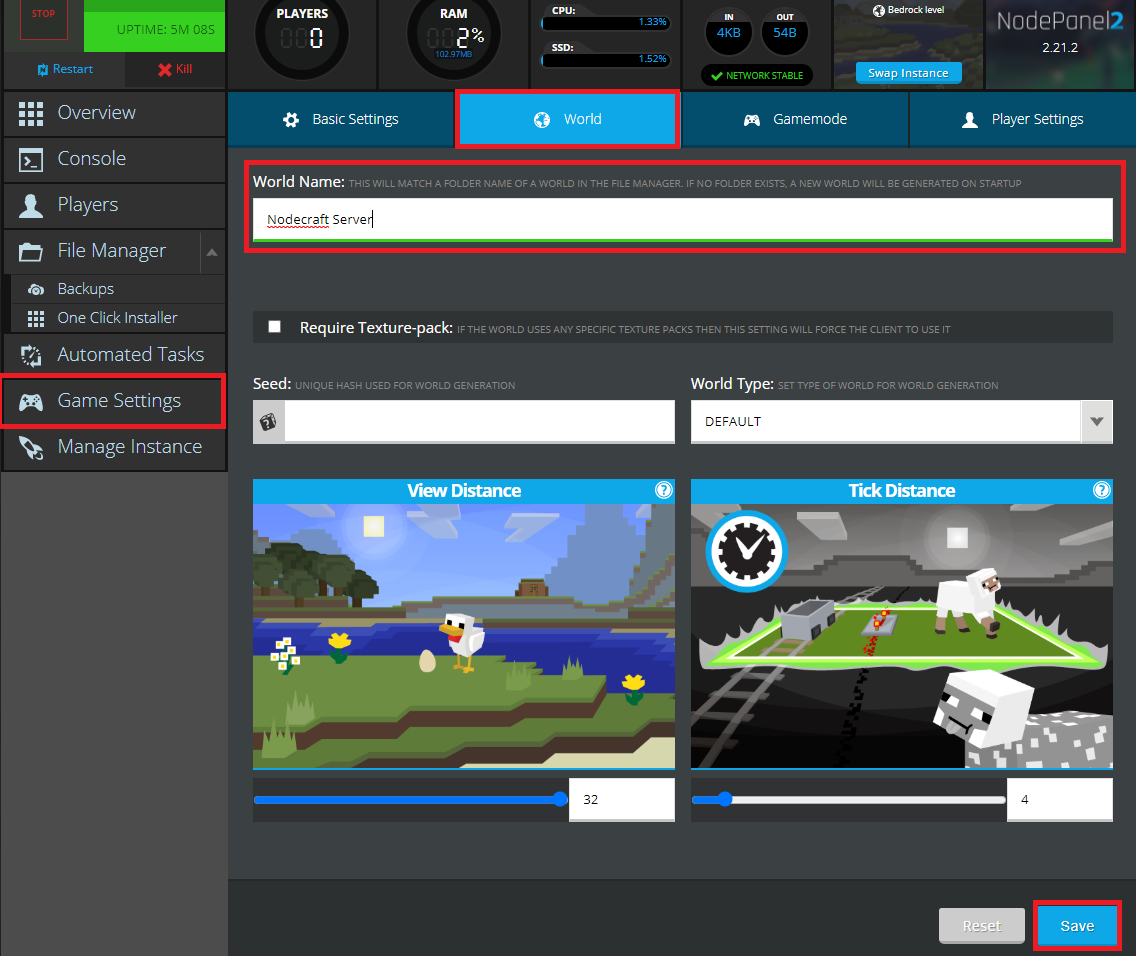 Restart your server for the panel to load up your world! If everything has been done correctly, you'll be able to continue playing on your singleplayer world, but allow friends to connect to it as well.

Create a Minecraft: Bedrock Edition Server today! Save & Swap to any other game, for no additional cost.
Start Free Trial