Uploading an Existing World to Your Conan Exiles Server

This guide will show you how to upload an existing single player world save onto a multiplayer Conan Exiles server, allowing you to keep all the progress you've made in your single player/locally hosted game and continue playing it in multiplayer.

Find the Files for Your Single Player Game

Start up Steam, and then right-click on the game Conan Exiles in your game library listing. On the small pop-up menu that appears, click "properties" at the bottom. A large window will appear; click on the tab "Local Files" across the top, then click on "Browse Local Files." 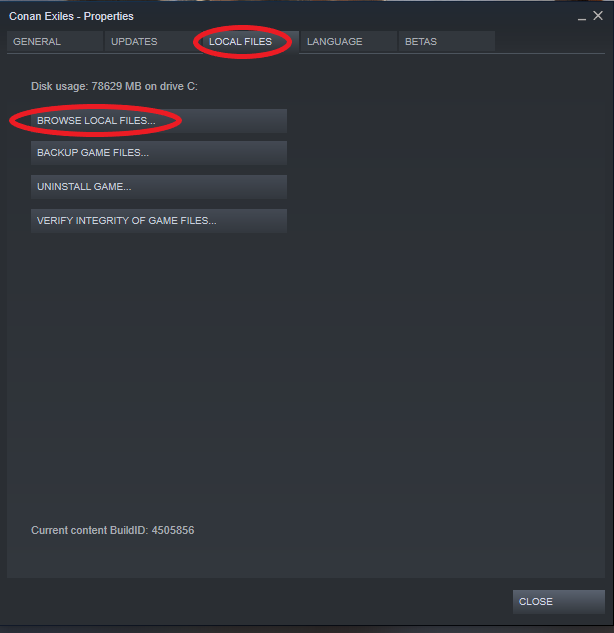 And that should open up a window where you should see the single player Conan Exiles files that are installed on your local home computer.

Open the /ConanSandbox folder, and the files you will need will be in two of the folders, /Mods and /Saved. You basically only need the main game save, the config files (for reference), and any mods you have installed on the single player files.

Main Game Save in /Saved

In Conan Exiles, the entire game is saved in just a single file, called game.db, which is in the .db database format

The game.db file contains all the information for every player on the server, levels, stats, feats, and the player's inventories. It also contains the information for every thrall and pet, their inventories, and every single player built structure in the game. Every foundation, wall, all your containers, and the contents of those containers. It's all packed into this one file.

The Config Files in /Saved/Config

Please copy your single player config files, which are normally found inside the /Saved folder too. They will be inside the config folder, and then either windownoeditor (or linux if you're using linux).

When you open the correct folder, you should see something like this: 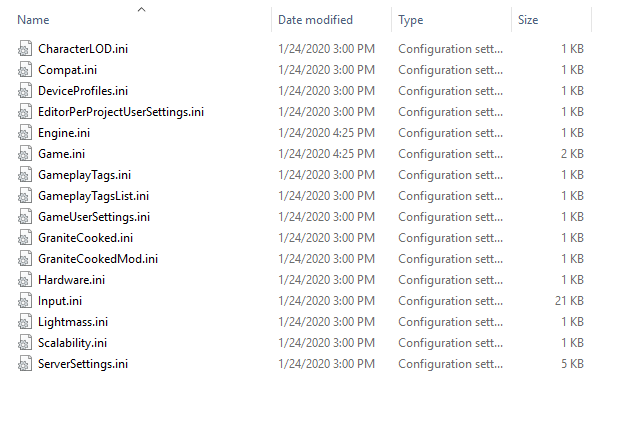 The only files you will most likely need to copy are ServerSettings.ini, and possibly Engine.ini, and Game.ini.

ServerSettings.ini is the main config file, and usually contains almost all of the game settings. There are only a few things that are set in Engine.ini or Game.ini, and it's not uncommon for them to actually be completely blank (which means you can skip copying them too).

If you were using mods, they will all be in the /mods folder. If not, you can skip this whole section.

Your mods will be the files that end in .pak inside the /Mods folder. If there is a modlist.txt file there, grab that too.

We highly recommend that you simply select all the mod files in this folder, and use a "zip" utility program to "zip" them up. That will make them easier to move.

If your game save was made using mods, you want to make sure to copy, move, and re-enable the mods BEFORE you attempt to load the save. If the game attempts to load a game save made with mods when the mods aren't loaded yet, it can:

Think of your mods like a game of Jenga. The mods are all the pieces down at the bottom of the stack, and your save is stacked on top of them. You have to restack everything at the bottom exactly the way it was, before you try putting the save on top of it. Otherwise it's going to collapse; bang, boom, crash.

Now that you have all the information from your single player game, you can begin setting up a multiplayer Conan Exiles server on your Nodecraft control panel.

Choose Conan Exiles, and install the base game.

Once it's done installing, go ahead and start the server up. Once it's done starting up, just stop it and let it shutdown normally.

Why should you do this?

On the very first start up, it will create a whole series of folders and files.

The rest of the instructions in this guide would be hard to follow, as you won't see entire folders, config files, etc. While you could manually create folders yourself, it's always better to let the game do it naturally to avoid spelling or capitalization mistakes (Nodecraft servers run in linux, and linux is case sensitive, meaning there's a huge difference between two file names like saved and Saved. The difference of the lower and upper case "S" makes those two completely different file names as far as the game is concerned).

When you create a new Conan Exiles server, there is an entire multi-page GUI on the "Game Settings" tab of the Nodecraft control panel for changing the settings of your server.

Many of the boxes will either be empty or filled with generic settings, and you'll want to restore all your own custom settings before you start the server again.

So, couldn't you just upload the config files from your single player game, and use those?

Our goal with the GUI was to make life simpler (and it does, a lot), but in this one case it has some unfortunate drawbacks. The system won't read in the existing config file, it will make a whole new one.

So, we highly recommend that you take a few minutes and reset everything on the GUI pages, box by box, and save the changes. Once all the changes are made, you don't have to worry about this issue any more. Any time you change anything on the GUI, it make a config file from all the settings on that page.

Copy the Mods and Re-Enable Them

You may have to manually create a /Mods folder inside the /ConanSandbox folder. You can do that by clicking the "create folder" button on the Nodecraft control panel.

Move all the .pak mod files, and the modlist.txt file to the /Mods folder. Unzip them if you have moved them as a zip file. As long as the modlist.txt lists every mod .pak file by its full filename, with an asterisk in front of it, the game will automatically load every mod on next startup.

We have a separate article which describes how to install mods on a Conan Exiles server in our Knowledgebase on the Nodecraft Website. That can be found in the "Related Articles" section at the bottom of the page.

In the newly created /Saved folder, the existing game.db is the blank unplayed world the multiplayer server just created on first start up.

You want to replace that with the game.db file from your single player world, which actually has your character and structures. You can either delete the old game.db first, or simply upload your single player one to that folder. It will automatically overwrite and replace any files with the same exact name.

As long as all the files were moved correctly (mods, config settings, and the save file), when you next restart the server your single player world will now exist on the multiplayer world!

By the way, this entire process works backwards too. You can take the game save from a multiplayer world and turn it into a single player world hosted on your local computer by reversing this process.

Create a Conan Exiles Server today! Save & Swap to any other game, for no additional cost.
Start Free Trial