This article will show you the basic process for installing plugin to an uMod (Previously known as Oxide) Rust Server. uMod is the name of the same group that produced Oxide in the past for the game Rust, but the uMod framework is now available for other games as well. Visit their website for more information: https://umod.org/

The process shown here should work for the large majority of uMod plugins, but there might be some that require some special handling. If you encounter situations which this guide does not cover, please contact customer support from your account here at Nodecraft and we will try to assist you with a possible solution.

Plugins will not work unless you have installed the uMod plugin framework on your Rust server first. Here at Nodecraft, we have included uMod in our automatic installer. After you have installed Rust, select the One Click Installer again, and choose uMod. Make sure it's in the Merge installation method. 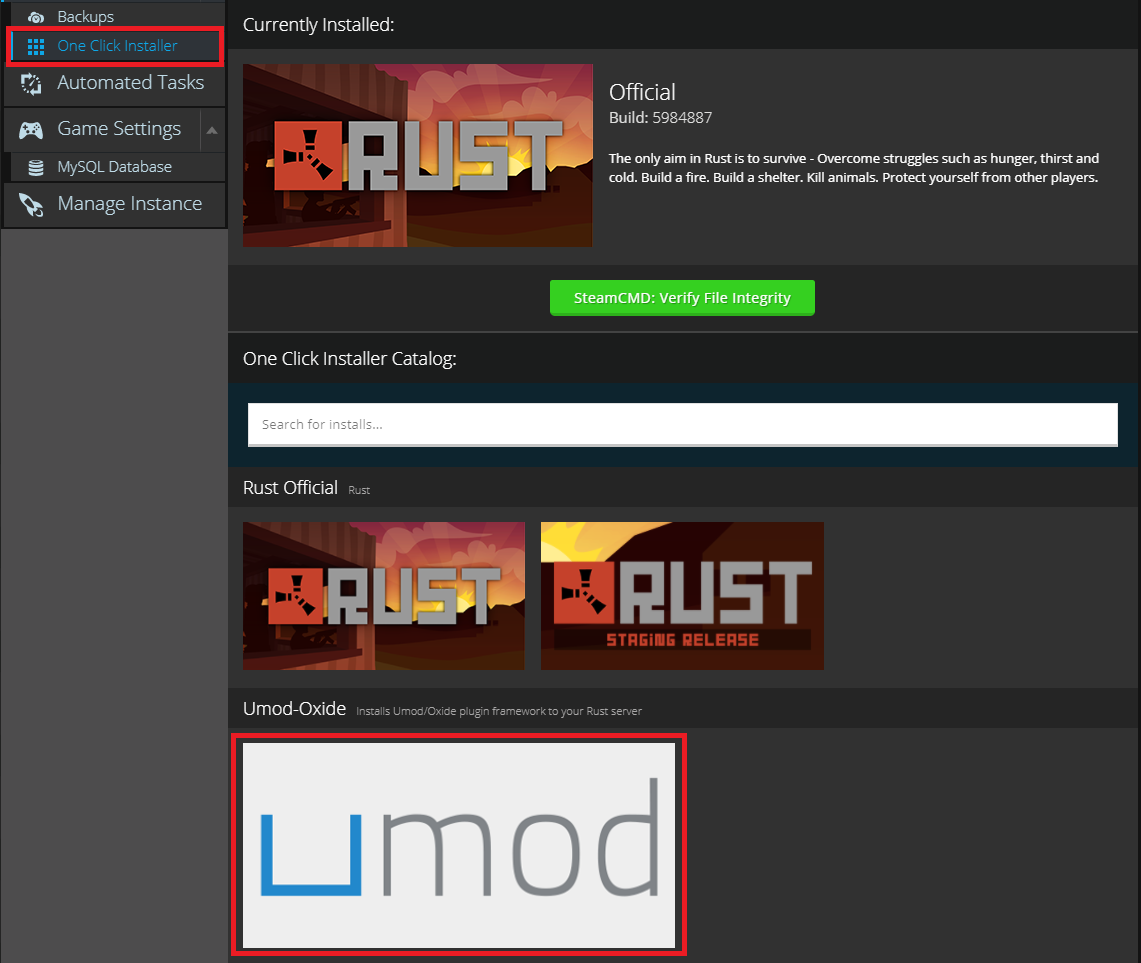 After you have uMod installed, start your server. uMod will create a series of folders and files on the very first startup. Without doing this, some of the following steps will be a lot harder to follow, as you won't see those folders on your server, and it will be a little confusing.

Where to Get the Plugins

The plugins for uMod are hosted at their site, https://umod.org/ On their website, click on "Plugins" at the top, and then click on the game "Rust". 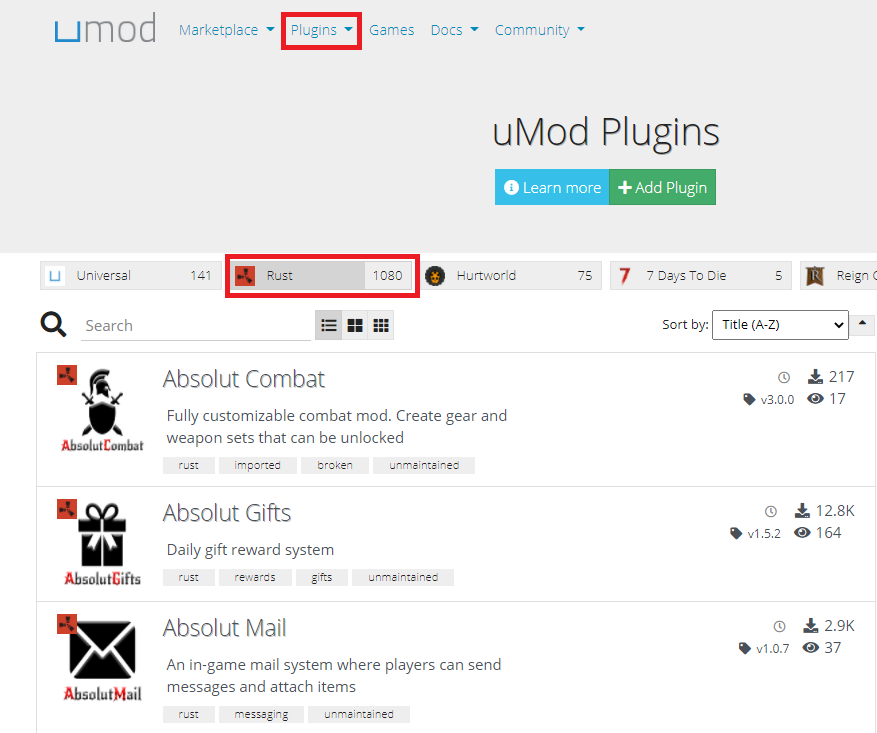 The "whitelist" plugin shown above, will simply download as a single file called whitelist.cs.

Upload Plugins to Your Server

After the plugins download to your own computer, you then upload them to your Rust server. The plugins need to be put into the plugins folder, which will be inside the oxide folder located in the main directory. 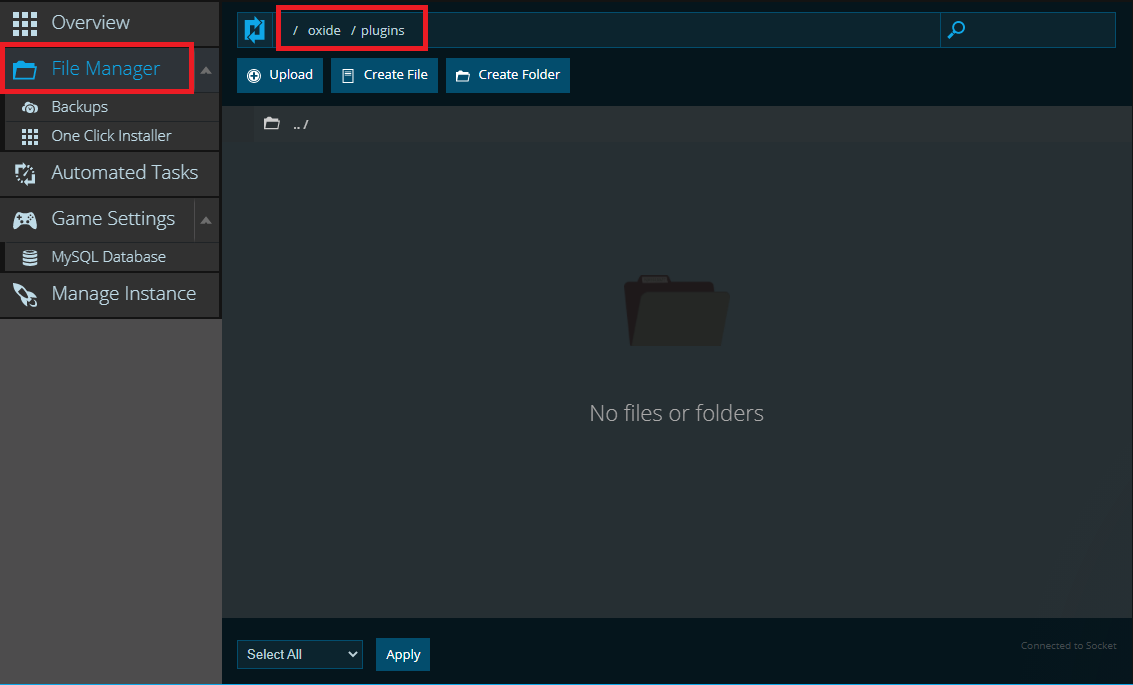 If you don't see an oxide folder, it's probably because the server wasn't started up after you installed uMod. That entire oxide folder is one of the folders we said would get created on first startup.

Most plugins won't work unless you do this!

A few uMod plugins will start working the minute they are put into the plugins folder and your server is re-started. They require nothing beyond simply putting them there, and the game automatically loads them on next startup. But, this only works for the most basic plugins, usually ones that apply some kind of global effect to all users at once..

If a plugin grants some special power, like the "vanish" plugin which allows you turn invisible, you wouldn't want everyone on the server to be able to use it! This plugin is usually used by admins so they can catch people red-handed doing something naughty they shouldn't be doing. If everyone on the server could turn invisible, it would be chaos!

Please refer to our article about uMod's permission system for more information on this.

The uMod plugin system is a very powerful tool, but it's also a fairly complex one too. They have documentation on their site. https://umod.org on the "docs" link at the top of the site.

There they have guides on many of the steps of setting permissions, so if you need more help with some of these steps, checking out their documentation is a good step.