This guide will show you how to take the files from a single player ARK: Survival Evolved game, and set them up on a Nodecraft multiplayer dedicated ARK server.

Once installed on a multiplayer server, your friends will also be able to join and make their own characters too, and you will also still keep all the progress you made in your single player game. You will still keep all the levels on your character, all the buildings you built, and all the dinos you tamed.

In the small pop-up menu that appears, click on "properties" at the bottom. 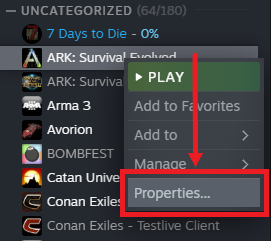 On the new window that appears, click on the tab along the top of the window labelled "Local Files", and then click on "browse local files" 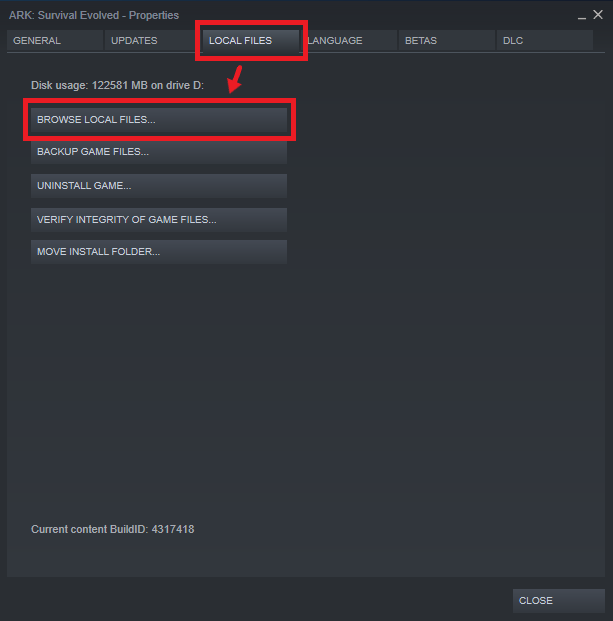 And here you will find all the files for the Ark game client on your local computer, along with the single player save information.

Finding your Save Game Information

There will be folders for each of the maps you've been playing on in single player. Each map folder contains it's own separate player and tribe information, for each player or tribe created on that map.

If you've just been playing on TheIsland map, then the folder labelled SavedArksLocal contains TheIsland map. If you've been playing on any expansion maps, then there will be a folder that begins with that map name as well.
A Ragnorak map will be in a folder called RagnorakSavedArksLocal for example. Procedurally generated maps will be in a PGArks folder.

Below is a sample screenshot of some of the files usually found in the SavedLocalArks folder, with "TheIsland" map. 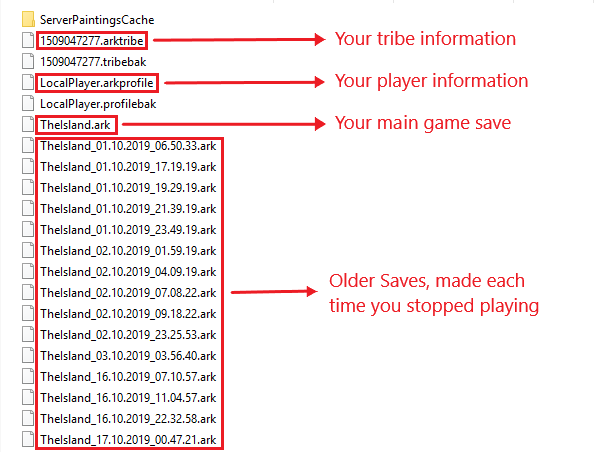 LocalPlayer.arkprofile is your main player save information in the single player game.
LocalPlayer.profilebak is a backup copy of your character information made by the game automatically.

NOTE: The XXXXXXXXXX in the Ark Tribe file names is the "PlayerID" which is an internal ID number used by ark. This is completely different from your Steam64ID number (if you're not familiar with what a Steam64ID is, we go over that in a section later on).

TheIsland.ark is your main world save.
The files that begin with TheIsland followed by numbers are previous saves made when you exited and shut down your single player game.

If you've made any paintings on a map, they are contained in the ServerPaintingsCache folder.

Files to Copy and Move

To transfer your character, tribe, and world, you will need LocalPlayer.arkprofile, XXXXXXXXXX.arktribe, and the map save (in most cases, TheIsland.ark), and all the files in your paintingcache if you want to bring those too.

Some of those files will need to be altered, but you will need those as a starting point.

In the Config files folder inside Saved, you also might want to copy the config files GameUserSettings.ini, Game.ini, and Engine.ini. You won't be able to use those config files as is, but you might need the information inside of them later on.

Setting up your Nodecraft ARK Server

On the dashboard of your Nodecraft account, create a new instance and choose ARK: Survival Evolved to be installed.

When it's done with the installation, you need to make the server ready for your single player game to be uploaded.

Install the matching mods on the server

If the mods aren't already installed, when it loads the save file from your single player game, all the modded content will be removed. Any items, engrams, dino's, or building items added by mods is stripped out on loading, if the mods aren't already installed. If you built your entire base with "Structures +" building blocks for example, you can find the entire base gone, and dino's floating in midair when you load into the save. Installing the mods beforehand should allow the save file to load correctly, and items won't be missing.

We have a guide on how to install mods on your Nodecraft server. https://nodecraft.com/support/games/ark/adding-mods-to-your-ark-survival-evolved-server

It's best to use the config files from your single player game only as a guide, and manually copy the individual settings over, one at a time - yeah, I know, I know. It's gonna take a while. There's a way to make copying the settings a little faster though, there is a search feature!

Uploading the files to your Private Dedicated Server

The files you copied earlier need to be moved to the ShooterGame/Saved/SavedArks folder on your private Nodecraft ARK: Survival Evolved server.

We recommend that you "zip" the file up using a zip utility before you try uploading them. You can either user the drag-and-drop feature in the file manager of the Nodecraft control panel, or you can use an FTP program to move the files to the server.

In the map folder for your single player game, the player information for your character is simply called LocalPlayer.arkprofile. On a multiplayer server, each player needs a different label (they can't all be called LocalPlayer).

On a multiplayer ARK server, each player's profile is labelled by a unique ID number on Steam called the Steam64ID. If you don't know what your Steam64ID number is, we have a guide on how to find that out for Steam account. https://nodecraft.com/support/games/ark/how-to-quickly-find-steam-id-numbers

NOTE: The Steam64ID is different then your "PlayerID" which is an internal ID used by ARK.

Do NOT rename the .arktribe File

The file that contains your Ark tribe information, which has 10 digits and ends in .arktribe, should not be renamed with your Steam64ID. That 10 digit number is your UE4 player ID number, used internally by Ark. If you leave it alone, the game should be able to figure out that you belong to that tribe, and automatically include you when you load into game. If you rename it to your Steam64ID, it will definitely NOT work, and you won't be a member of that tribe when you join (and none of the buildings or dinos will belong to you).

Load into your Game

If everything has been done right, you should be able to connect to your muliplayer ARK server, and the game will check your Steam account, then find the .arkprofile that matches your Steam64ID.

Sweet. Now you can get back to the fun stuff, actually playing the game!

When you start a single player game in ARK: Survival Evolved, time only passes while you're actually playing, and stops when you shut down the single player game. This would cause some activities like growing crops and taming dinos to take extremely long times to complete.

In single player, adjustments are automatically made to speed those processes up. Crops grow faster, food spoils faster (so you get that rotten meat to make narcotics), and tames take less time. In single player it takes significantly less food or kibble to complete a tame, and you will use only a fraction of the tranquilizing arrows/darts, taming food, and narcotic shown in the ARK wiki, or Dodorex online taming guide.

When you copy your single player world to a multiplayer server, with the stock settings, you won't have those adjustments anymore. So just be aware that tames might take way more resources then you were used to using before.

If you're thinking of adding those single player adjustments back to the multiplayer world, be aware that they have huge effects on a dedicated server that's running continuously 24/7. Food will spoil so fast, that you'll log on the next day to find half of it gone. Increased taming rates can mess up properly imprinting a baby dino, and imprinting gives a dino +20% bonus to all of it's stats, +30% to damage output, and -30% to damage taken when you ride it. Missing out on that would suck.

Even just playing in single player mode, you can have some dinos reach full growth before the last imprinting timer runs out, meaning you can't fully imprint them.

Sometimes when you follow the steps above, when you join the game, you will find all the stuff there: your world is there, and all the structures you built, and dinos you tamed in your single player game are there...

But you can't do anything with any of it. You aren't part of the tribe anymore, and none of it "belongs" to you now. You can't open any doors, boxes, or ride the dinos. If dinos were left on "aggressive" or you hit one of them, they'll attack you instantly.
This sucks. A lot.

There's a fix for this though. You can use admin commands to takeover the old tribe and get control of all your stuff back. Below are the steps to do that.

Enable Cheats on your Server

Connect to your ARK server. When you load into the game, hit the tab key to open the console window in game.

Enter the following command to activate "cheats" in game. You need to have set an admin password for your server beforehand to turn on cheat mode:

The admin password for your server can be set on the Nodecraft control panel on the "Game Settings" tab, then the "Advanced" tab. Make sure to hit the save button at the bottom of the page afterwards, and then restart the server. You can also set the admin password in the GameUserSettings.ini file too.

If done right, you are now an admin!

You can test to make sure you're an admin by hitting tab again, and typing cheat fly. You should see a message that you "feel lighter", and when you hit the jump key you will rise into the air. Type cheat walk to turn off fly mode if you want afterwards.

Hit tab again, and type this command (NOTE: for this command, you don't have to type cheat or admincheat before it as you do for most cheat commands):

This turns on a special view in game that shows you a ton of information in an onscreen HUD. 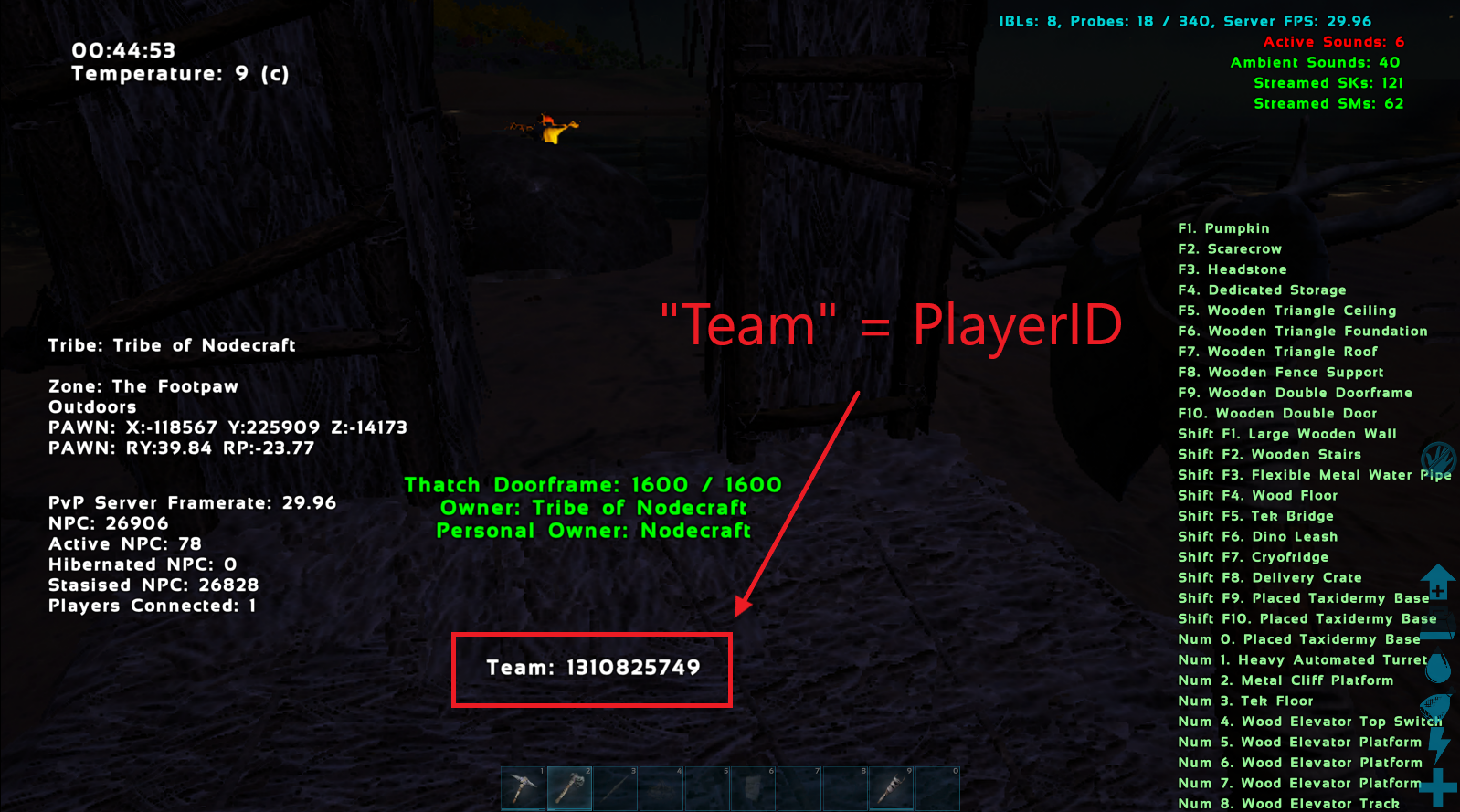 Now when you look at any structure that belongs to a tribe, you will see a "Team" number towards the bottom of the screen, like in the screenshot above.

That is the UE4 ID in ARK for your old tribe. You will need that information for possible fixes. To turn off the HUD, use the same command setcheatplayer but with zero or false after it.

Use the admin command taketribe to automatically take ownership of everything in that tribe (the one that used to belong to you in your single player game), with the following command:

tribeID is the team number from the previous section, where you turned on the setcheatplayer HUD.

Wham. All the stuff from the old tribe is now yours again.