Adding Mods to your Starbound Server

Non-workshop mods are installed the exact same way on the server as on your computer; simply use the File Manager on the left side of your NodePanel to access the server's mods folder. The easiest way to get Steam Workshop mods is described below, and starts with subscribing to the mods in Steam Workshop and letting Steam download them automatically to the client on your local computer.

Subscribing to the Mods 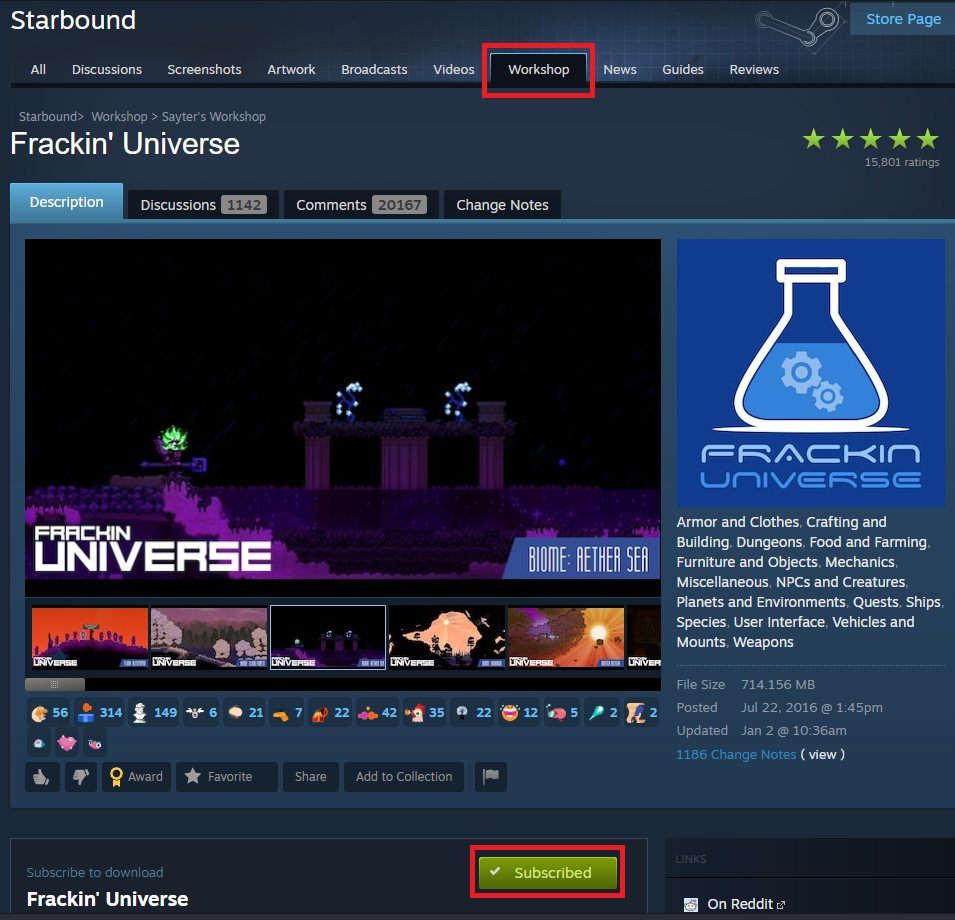 When it's subscribed to, the button changes to say "Subscribed" with a checkmark, and Steam has begun to automatically download the mods in the background to the local computer files. For a large number of mods, you might have to wait a little while for Steam to finish downloading them all.

Preparing the Mods to Upload to the Server

To find where Steam stores the mods it just downloaded, please do the following: 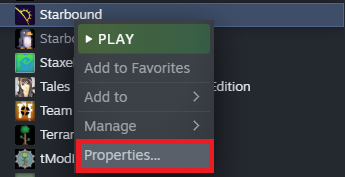 On the next pop-up window, click on the "Local Files" tab across the top, and then on "Browse Local Files". 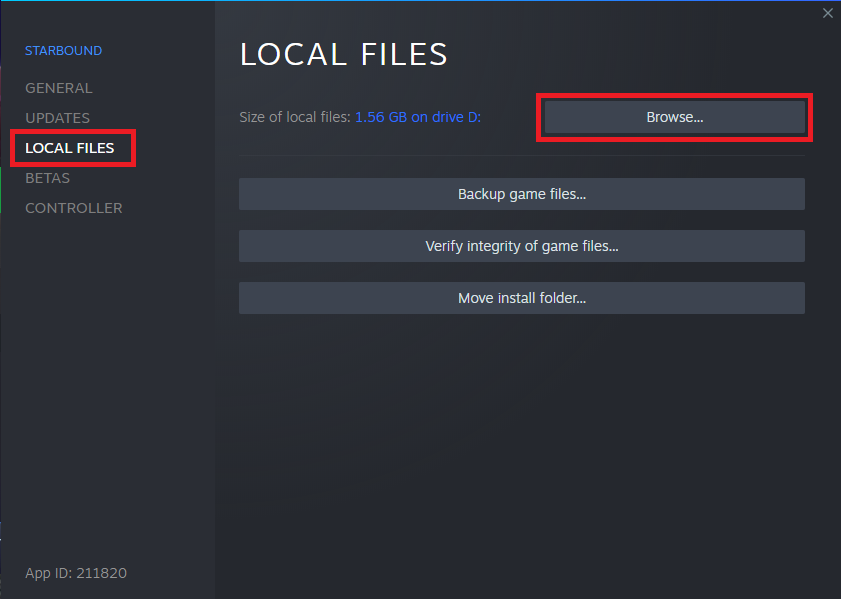 You will see this view of the game files on your local computer, as shown below. To get to where Steam hides the mods, click on the arrow in the upper left to move up one level, which is circled in the screenshot.

In the screenshot below, you will also see a "mods" folder. That is NOT where Steam stores the workshop mods that it downloads automatically. The "mods" folder is where you manually add your own mods, and after a fresh install this folder is usually empty .

In the next level up, you will see a list of all the Steam games installed, and you will click that same arrow one more time to go up another level. Then you should see this...

The "Workshop" folder is where Steam stores all the content that it downloads for all games. Click on the folder to open it.

The ID number for Starbound is 211820, so click on that folder. Inside there, you will see a folder for every mod that you subscribed to. The names of the folders are the Steam workshop ID for that mod. Inside each folder is a file called contents.pak.

Upload the Mod Folders to the Server

We highly recommend using a program to package and compress the folders, such as a program that does .zip or .rar formats. This will make a single file that is often smaller then all the separate folders were (and smaller means faster upload).

Then upload that zip file to the server, to the folder /mods. You can use drag and drop in the file manager, or an actual FTP program to move the file. Lastly, unpackage the files.

Use NodePanel to Rename Files

The last step before the server can actually use the mods, is the file inside every numbered folder needs to be moved out of that folder and directly into the /mods folder. The server will not load any files inside other folders inside /mods. The problem with that is, they're all named the same exact name: content.pak.

In the Nodecraft File Manager, this will cause them to overwrite each other when you start moving them (move 20 files with the same name, and when you finish, there's only 1 there. A file that was overwritten 19 times). So they all need to be renamed something unique. The usual method is to rename them to the workshop ID number (the number that the mod folders are named).

If you have a lot of mods, this will take a while, and it's kind of tedious. So, here at Nodecraft, we have a magic button that does it all for you. Seriously, magic button.

After uploading the mod folders, go to the "Mods (WIP)" tab of the control panel, and click on the blue button labelled "Steam Workshop Fix". This will:

This only works if you left the mod folders exactly as they were, inside the numbered mod folders. 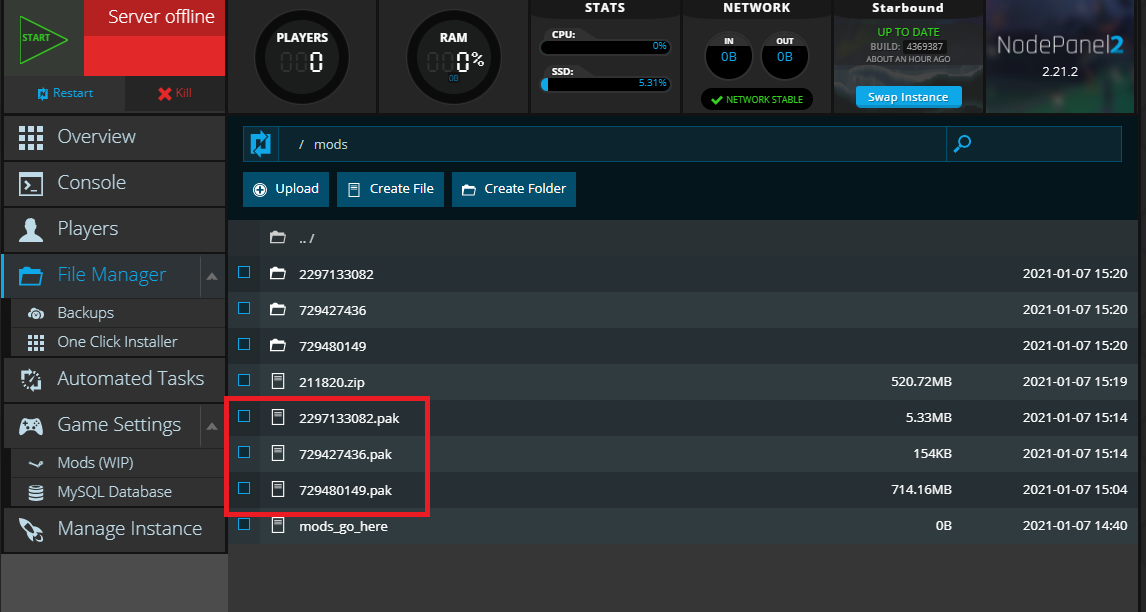 If you don't have a magic button that does this for you (ie, you're trying to set up your own server at home), then all the content.pak files needs to be renamed and moved manually. We highly suggest you use the Workshop ID numbers so you can tell what is what later on.

Restart the Server to Load the Mods

Please restart the server, and it should automatically load every mod in the /mods folder. If there are any issues with a mod loading at startup, the "Console" section of the server will usually contain any error messages related to that.

Create a Starbound Server today! Save & Swap to any other game, for no additional cost.
Start Free Trial