The Alpha 17 version of 7 Days to Die introduced a new modding system to the game that is being referred to as "modlets". This guide will explain what they are and how to use them.

Modlets are self-contained files that will make adjustments to the .XML files used by the game. They are loaded automatically by the game during the initial loading only.

No direct changes are made to game files, so this allows many modlets to be used simultaneously with far fewer conflicts then the previous method. Some conflicts can still happen, like for example if two mods both try to change the same crafting recipe requirements simultaneously. Since the .XML files that the game uses are not being edited, the modlets can also be instantly and easily removed with no lasting changes made to the games core files (though it may cause issues with saves that contain the modded information).

This modlet system completely avoids the manual editing of game files that was often required during the previous system.

The best source for finding modlets is on the official 7 Days to Die forums found here: (https://community.7daystodie.com/forum/22-game-modification/). There is a permanent category for "mods" in the forum, and authors will post announcements about their modlets there.

Posts in the forums are often proceeded by tags, such as "MODLETS". There are other tags such as "OVERHAUL", "PACKS", "SDX", and "API" which are used for other systems. Just look for the "MODLETS" tag. The authors will usually provide directions on where to download their modlets in their posts, which can vary from private websites to GitHub. If an author has written multiple modlets, they often provide their modlets contained in one single large package. Download the entire package and unzip it. You will find separate folders for each one of their modlets inside.

Each modlet will have one or more folders inside of it, and a file called modinfo.xml. The modinfo.xml file is very important make sure it's in the folder. You can see an example of this particular HUD mod's file contents in this screenshot:

Installing Modlets on the Server

Create a folder in the main directory of the server, called Mods, if it is not present already in the "File Manager" section in your NodePanel. 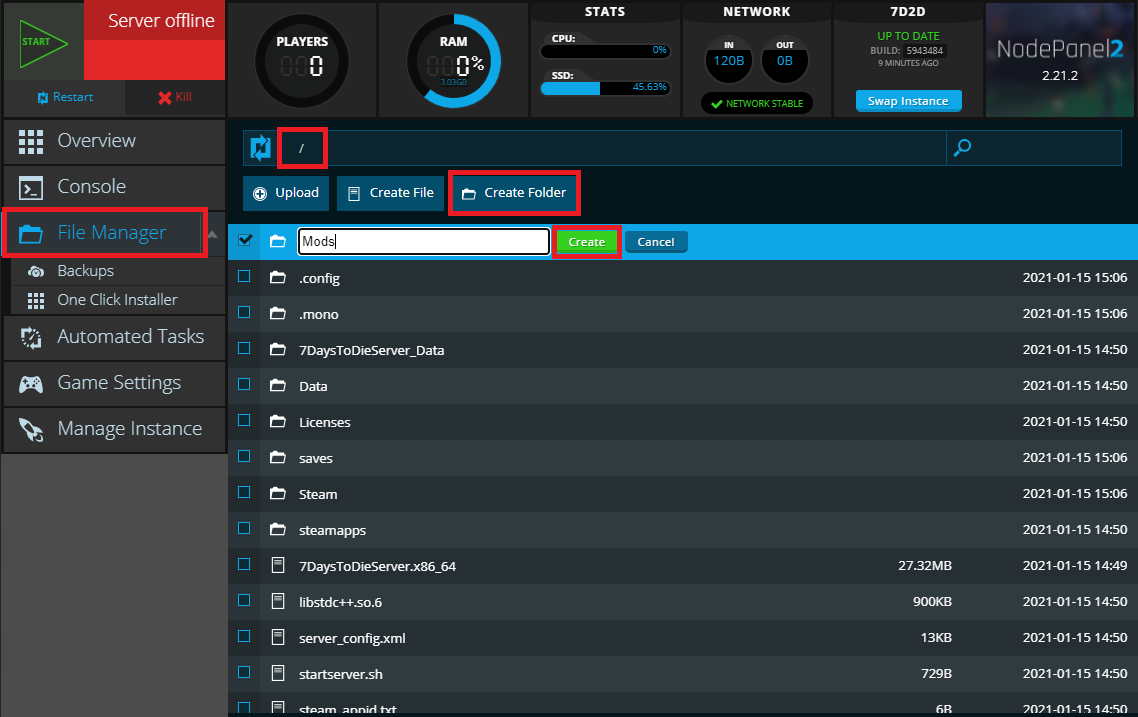 Upload the modlet folder into the Mods folder, using either drag & drop in the File Manager, or FTP. 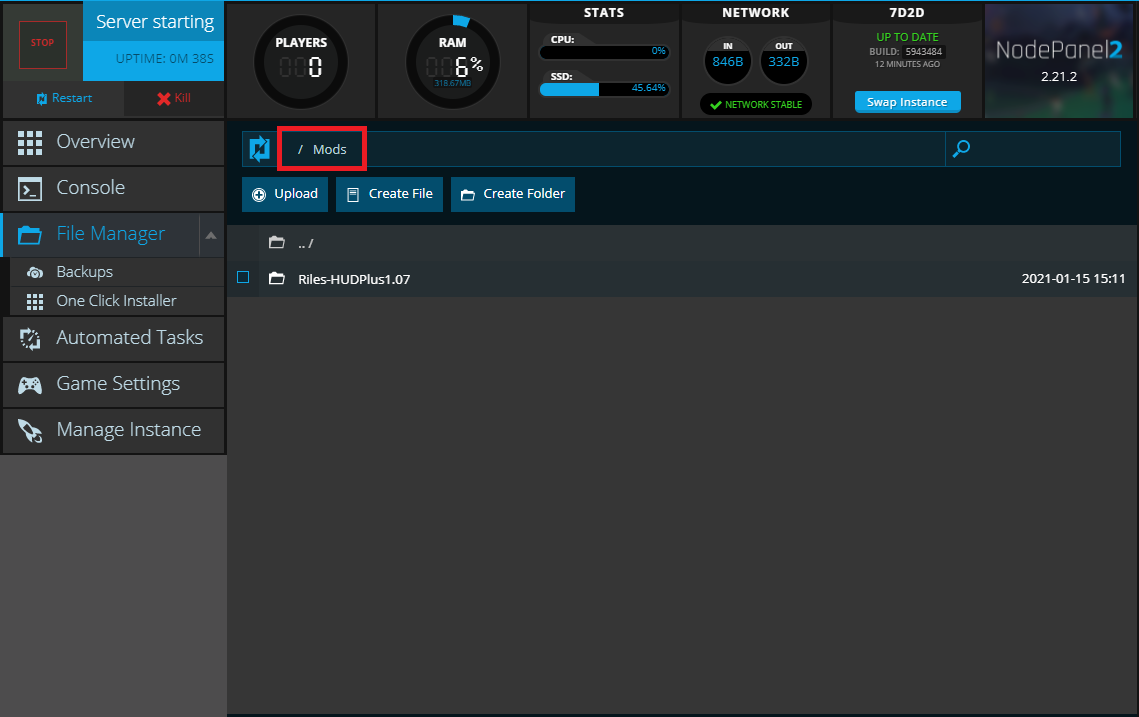 Restart the server. You're done. Not kidding, that's it.

Players who want to connect to a modded server will need the same modlets installed into a Mods folder on their client as well. The process is thankfully the same as installing the modlets on your server, so you can repeat the same steps above on your game client as well. 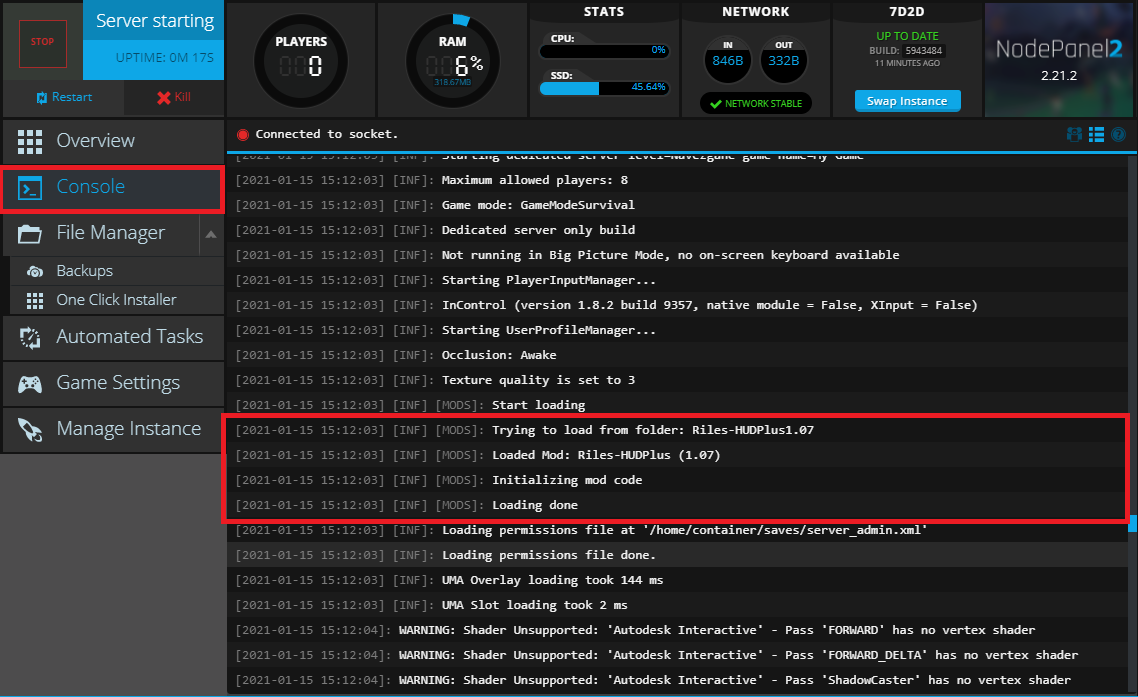 Removing Modlets from the Server

Simply remove them from the Mods folder. Click on the check box of the modlet you wish to delete, then click Delete.

Installing other types of Mods to your server

Installing the other types of mods (such as the ones labelled as Overhaul mods) are very possible to install on our servers. They usually come with their own installation instructions from the mod author's who made them which you will want to follow. The reason for this is because they provide files that replace the vanilla files with their own modified ones. Mods that fall under this category are the popular "Darkness Falls" and "Mischief Maker" mods. Since these mods replace the vanilla ones, you can imagine that if 2 mods want to change the same files but in different ways, conflicts can easily happen. We highly recommend making backups of your server whenever you decide to add these types of mods to your server.

Create a 7 Days to Die Server today! Save & Swap to any other game, for no additional cost.
Start Free Trial