Datapacks load in a specific order, and that order can possibly affect how they work. Changes added by one Datapack can be overwritten by others loaded later on. The author of a Datapack may specify what order their Datapack needs to be loaded in.

The last Datapack in the loading order has the highest priority. It can overwrite and change anything that was introduced by Datapacks that were loaded before it. The loading order is stored in the one of the world files (level.dat), but we do not recommend trying to directly alter this file.

Instead, there is a series of commands described below for controlling the activation or loading order of Datapacks.

Where to Enter Commands

You can enter the Datapack commands in two different ways:

You will need to have the correct Operator level set for your player on the server, in order to use these commands (or others) in chat.

Some of the following commands require a Datapack file name as an argument, to tell the command which one to enable, disable, or change the loading order of. When you enter a file name inside the command, it has to be in a special format. 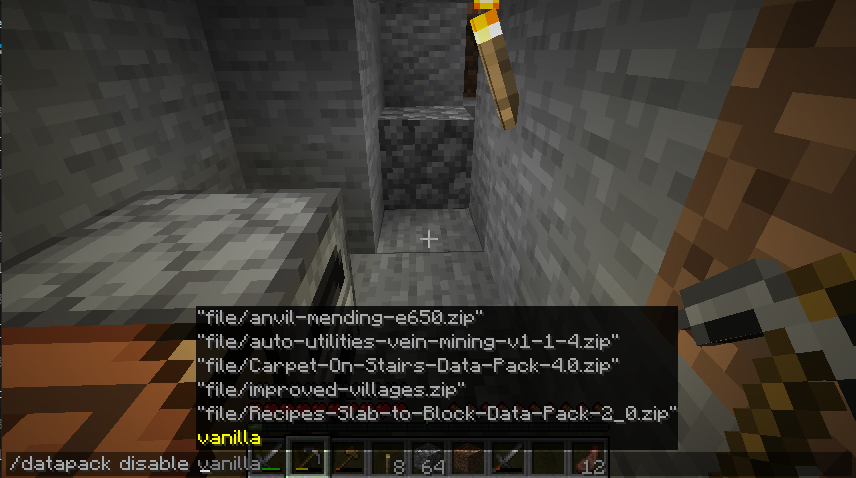 If you're entering the commands in the chat window in-game, you will have a pop-up window appear directly above the chat bar.

This window will list all the Datapacks, and you can simply click on one to have it auto-filled into the chat bar below. If you're re-arranging the loading order of a lot of Datapacks, it's probably going to be much easier to do it in-game in the chat window. The auto-fill will save you a lot of time.

datapack list by itself will list all the Datapacks currently on the server, whether they are loaded, unloaded, or incapable of being loaded (they are broken, or not formatted correctly).

You can also add optional arguments available or enabled to the end, to control what kinds of Datapacks it lists.

datapack list enabled lists only the currently loaded Datapacks that are working on the server.

datapack list available lists unloaded Datapacks (including those in the "Datapacks" folder that might not be working correctly, or that the game cannot load).

This command can be used to permanently disable a Datapack, so the server does not try to automatically load it each time it starts.

This command can be used to turn on disabled Datapacks. The optional arguments first and last can be placed at the end to set the loading order, too. Datapacks that load last actually have higher priority then ones loaded earlier.

This command can be used to change the order that the Datapacks are loaded in. Use the options before or after along with the name of a Datapack that already exists to insert it into the loading order in a particular position (relative to the "existing Datapack name").

This command will reload all the enabled Datapacks. It can be used in the server's console, or in the in-game chat window, and it can be used while the server is running.