We’ve been reflecting on everything that’s been going on in the last 18 months at Nodecraft, and wow it’s been an amazing pace of change. Between launching NodePanel 2, the branding change to Nodecraft, Inc, growing our team by 3x, and all the improvements we’ve made to our platform for customers, we’re starting to realize that we’re improving online gameplay at a global scale, and have been growing past our roots of a small company and into a much faster, high growth startup.

We’ve always been focused on the customer experience, which is why we expanded our support to 12 hours every day. We feel that too many companies get away with no hours listed or in some cases less than 6 hours of official support time. 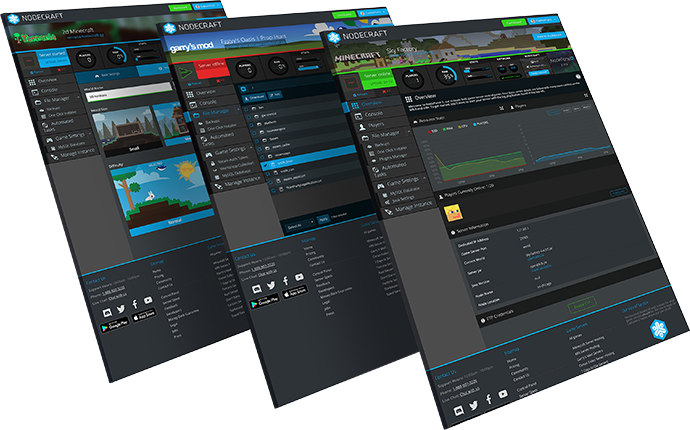 We’re also reducing latency by bringing more connectivity to our customers in our campaign to double the number of data-centers hosting game servers worldwide. Our full time development team is still working on ensuring quality service with a few locations, but they are coming very soon! View the Nodecraft game server cloud on our network page.

Building a catalog of games

With the launch our new platform with NodePanel 2, we expanded from just offering Minecraft server hosting, to 26 games including ARK: Survival Evolved, Rust, Terraria, Starbound, and dozens of others. NodePanel 2’s innovative instancing system was the first solution that allows gamers to save their servers and instantly swap to any game in our catalog.

These changes are a part of the new trend in creating game servers where gamers don’t want to be tethered to just one game, much less losing their worlds when they are hopping between games. This is just one component to building the premiere subscription service for gamers.

Private Game Servers as a Service

In the last few months, we’ve been working with Game Developers, Esports organizations, and other gaming companies. We've found that they all share one key thing in common; they are struggling to instantly create multiplayer game servers, and almost no one has figured out how to customize them at an API level. These providers are leveraging the APIs that Nodecraft has built to instantly add and automate CS:GO servers in Esports tournaments, create private Minecraft servers for community events, and improve fan engagement with social influencers.

If you’re building a gaming service, need to instantly add multiplayer servers, or want to build an online game, please contact us. We’d love to hear more about your project.

With the Support-A-Creator program, we embarked on our first steps to start generating revenue for game developers. We’ll soon be launching another program to add more revenue opportunities to the game developers that create amazing online games. Our vision is to continue to build the subscription service that gamers rely on to save their online games, while providing support to game developers on both an infrastructural level and business model.