Nodecraft gives you affordable access to the best minecraft hosting service. Our custom NodePanel 2 interface makes it easy to get started. You can save and swap to host any of our supported games (vanilla and modded) and there are no limitations on player slots!

Your Minecraft server hosting setup is instant, your control panel is easy to use & mobile friendly! 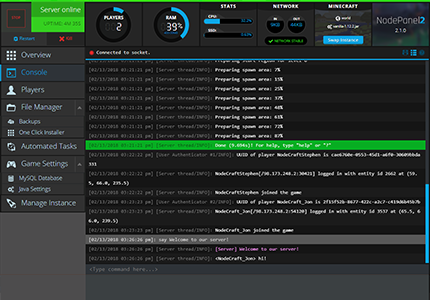 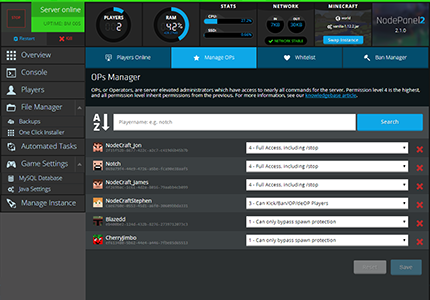 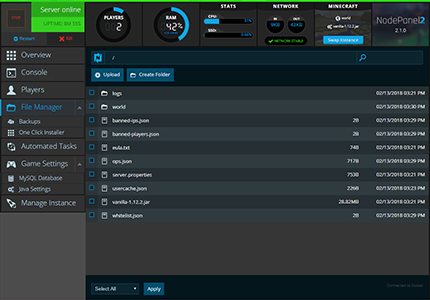 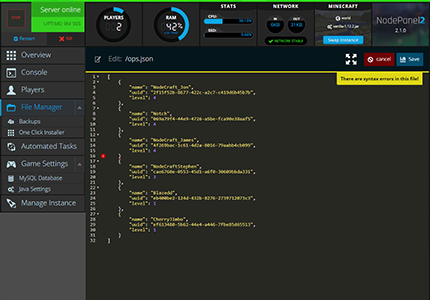 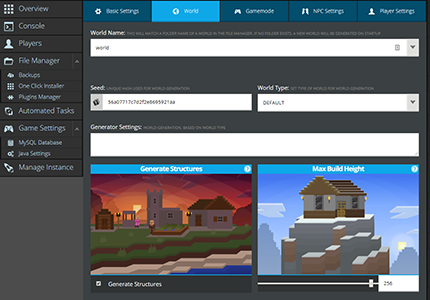 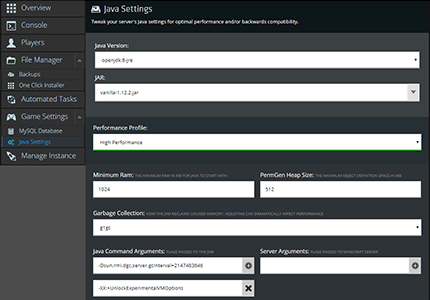 With NodePanel, your Minecraft server hosting is installed in seconds. NodePanel lets you easily create modded servers, install modpacks, install plugins, and change configurations (like your whitelist). Plus, with our app, you can easily manage your game hosting from your phone.

Hundreds of modpacks are available through our panel. From Minecraft Forge, to Spigot and Sponge— whatever server jar you're looking for, mods are easy to install and play. NodePanel also automates updates so you game more and spend less time handling maintenance..

Some modpacks require more server resources than others to run smoothly. If you have any questions about this, our support staff is always happy to help! Visit our modded Minecraft server hosting page for more information on supported mods.

Create your serverStart Free trial Create your Minecraft Server today! Save & Swap to any other game, for no additional cost. 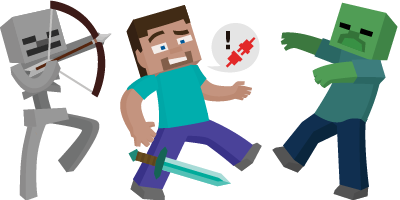 We're gamers too, and we know that nothing is more frustrating than lag and crashes.

Unlike other Minecraft server hosting providers, we make sure not to overburden our servers— this means we average only 12 customers per device. This allows your instance to access more CPU cores, disk IOs, and RAM. More power per user means you will have protection against the common headaches of lag and crashes.

Choose a server near you. Our DDoS protection provides our customers with low latency and 99.9% uptime.


Minecraft server support staff will answer your questions within minutes!

On average, we respond to your conversations within 30 minutes and resolve your problems within an hour. Our support staff is available from 10am to 10pm (CST) every day!

Our pricing starts at an affordable $9.99 per month for your Minecraft hosting. We don't have any limits on player slots, you can customize your subdomain (or your own domain name), and whitelist players for added security! But you play other games too, right? So do we. That's why we created a system that allows you to save an image of your progress and freely swap to host a different game, at no additional cost.

So what if you have a burning need for some Hytale for a day, then you want to switch back to Minecraft tomorrow? Great, do it! Don’t worry about fees for swapping, because there aren’t any. Save your Minecraft instance and then load your Hytale instance and continue gaming! Nodecraft gives you more freedom and the best service, at an affordable price.

You can swap your Minecraft Server to any of these games, for free:

Moving from another host, your local network, or have your own world?

Our team are available to help you migrate from another host, or upload your own world, configurations, and more. NodePanel supports easily uploading files and, within a few clicks, you'll be up and running with your own hosting. We also have video tutorials and a knowledge base.

NodePanel supports uploading files to your hosting plan with our web-based files manager (like FTP). We also have video tutorials and a knowledge base.

Don't hesitate to contact our team via our support portal or at support@nodecraft.com.

View more tutorials
Create your serverStarting at $4.99 Create your own Minecraft Server today! Save & Swap to any other game, for no additional cost.

"Their control panel for Minecraft, "NodePanel", is the best designed interface that I've seen for working on your Minecraft mod-pack."

"I have used Nodecraft on and off for some time. Support 10 out of 10

To get in touch for help or even a update to a question, is less then a minute with the chat service.
Last problem was a hardware problem and it was resolved under 6 hours. I can not ask better then that!!!!! Keep in mind that was on weekend hours not during normal hours."

"The user interface on the website is extremely easy to use while still being complex enough to get creative. Almost every question I've had was already answered in the Knowledge Base. The one time I have had an issue requiring staff assistance they were very helpful and some the issue in a short amount of time."

Minecraft is one of the most popular games in the world. It is a multiplayer sandbox game that allows players to explore a virtual world, fight enemies, chase adventure, and create almost anything with gathered resources and building blocks.

Minecraft is playable on many platforms including your PC, Mac, smartphone, tablet, Xbox, or Playstation.

Our Minecraft hosting service lets you and your friends play your way (with no lag) and backups of your creations!